Paul Giamatti, left, portrays Harvey Pekar, whose mundane life was turned into a long-running comic book series. In this scene from "American Splendor," he gets trapped in line behind a demanding customer (Sylvia Kauders).

Before the Internet helped facilitate the idea of granting everyday people a widely available soapbox to vent their frustrations, Harvey Pekar was quite a novelty.

The scraggly haired, hoarse-voiced, divorced loner worked a mundane job as a file clerk at the Veterans Affairs hospital in Cleveland. With an intense gaze that actually proved more observational than hostile, Pekar achieved a certain Zen mastery of cynical wallowing.

He certainly didn't seem the type to become a pop culture icon.

As David Letterman once remarked, "(Pekar) looks like every police artist sketch I've ever seen" or "the type of guy you see sleeping at a bus station."

But in the 1960s he met fledgling artist Robert Crumb through their common interest in records and comic books. Their friendship endured even after Crumb became hailed as the foremost artist of underground comics.

Years later, Pekar was complaining to his pal that the superheroes and talking animals of the genre had nothing to do with the average Joe. He lamented that it would be great if there was some way to give voice to the common man, because, after all, "Ordinary life is pretty complex stuff."

The conversation convinced Pekar to write about his own life. But unable to craft anything more than rudimentary stick figures, Pekar was delighted (if that's the right word) when Crumb volunteered to illustrate the project. The collaboration became "American Splendor," an ongoing series since 1976 about his day-to-day existence.

The comic brought critical acclaim, awards and even regular appearances on television. Now it has culminated in an eccentric feature film, which successfully adapts Pekar's story -- or anti-story -- to the screen.

"American Splendor" is more admirable than entertaining and more cinematically creative than emotionally involving. Yet it's a film that manages to capture the curmudgeonly subject's personality with honesty and flair.

Central to the enterprise are two veteran performers who've never been household names. 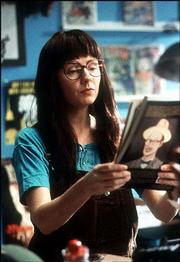 Doughy character actor Paul Giamatti shines in the leading role. While he physically doesn't resemble Pekar that much, he masters his trademark stare.

Giamatti has shown tremendous range in films such as "Private Parts" (where he played the odious villain nicknamed "Pig Vomit") and "Man on the Moon" (as Andy Kaufman's partner-in-crime Bob Zmuda). He does a terrific job taking what could have been an unlikable portrayal and summoning the individual's humanity to the surface.

Also showcased in a breakthrough role is Hope Davis ("About Schmidt"), who plays Joyce, a mousy, long-distance admirer of Pekar who moves to Cleveland and marries him. The film's episodic plot really kicks into gear at the 45-minute mark, when the neurotic woman shows up. Self-described as a "a notorious reformer," Joyce's attempts at blending in to Pekar's lifestyle are both humorous and painful.

If ever there were two people who seem right for each other, it's this pair.

The story -- or anti-story -- of Cleveland file clerk-turned-comic book subject Harvey Pekar (Paul Giamatti) is successfully adapted to the screen. More cinematically innovative than emotionally involving, the film certainly manages to capture the curmudgeonly subject's personality with honesty and flair.

Also ideally partnered are husband and wife filmmakers Shari Springer Berman and Robert Pulcini. In their first nondocumentary, the team takes about as much liberty with narrative delivery as possible. They boldly combine comic book-style conventions -- paneled frames, characters talking in thought bubbles -- with some of the most jarring examples of weaving fact and fiction available.

In one scene, Harvey is given some jellybeans by his co-worker and frequent comic book subject Toby Radloff (Judah Friedlander). The mannerisms of this nerdy freak are presented as so cartoonish that he seems like an amateur performance artist.

But then the camera cuts to a studio set where the two actors playing these roles silently sit in the background as the real Pekar and Radloff continue their discussion at a craft-service table. Not only is the effect eye-opening, but it becomes clear that the portrayal of the eccentric Radloff from before was spot-on accurate.

This is one of many tricky ways the filmmakers blend the surly Pekar into his fictionalized autobiography. At one point, Giamatti is waiting in the NBC green room to go on "Letterman," then the camera cuts to the actual taped footage of Pekar on the show. Meanwhile, the actress playing Joyce is watching the real moment on a TV monitor.

In any other movie, this patchwork device would be distracting, but it seems to thrive in "American Splendor." Pekar's life is such a blur between reality and fantasy anyway, that to pretend it's anything else would be missing the point.