New York — The earth, the seasons, tribal culture and the soul of the weaver define the rich tradition of American Indian basket-making, an applied art for thousands of years that is now undergoing a renaissance.

Woven from grasses and reeds, roots, tree bark and other natural fibers, baskets served tribal societies as a way to transport and store goods and game, carry infants, cook and serve meals, and were used in sacred rites and as gifts and heirlooms.

Distinctive shapes and designs differentiate the woven baskets among tribes in every region of the Americas, and each is encoded with personal information of the weaver. Individual artistry and quality craftsmanship has always been prized. The best woven baskets fetch thousands of dollars in a lively market for Indian relics.

"Baskets are our art, culture and history," says Pat Courtney Gold of the Wasco Nation in Oregon, one of six tribal people participating in a major exhibit of historic and contemporary basket weaving at the Smithsonian National Museum of the American Indian in New York City.

"The Language of Native American Basket: From the Weavers' View," which opened Sept. 20 and runs through early 2005, presents more than 200 of the museum's best baskets from the 19th and early 20th centuries.

To emphasize that basket weaving is a living and evolving art, the acclaimed weavers each selected four baskets from the museum's collection and paired them with their own and other Native basket-makers' recent work. 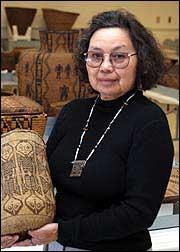 Pat Courney Gold, a member of Wasco Nation in Oregon, displays an antique Wasco basket at the Smithsonian Institution's National Museum of the American Indian in New York. Courtney Gold's work is included in the exhibition "The Language of Native American Baskets: From the Weavers' View."

His cast-bronze gourd with bundle-coiled bear grass resembling a decorative breastplate took 18 months to create. "This piece walks in two worlds, just as many Native people do," Johnson says.

Hoffmann, 45, of Waterville, Maine, contributed an "ear of corn" fashioned from wicker-plaited black-ash splints, with a wart-weave overlay. A photo of her creation is featured on the title page of the show's catalog.

Courtney Gold began basket weaving in the early 1990s after a long career as a mathematics teacher and computer expert. She was recently commissioned by Harvard University's Peabody Museum to write an essay on a Wasco basket collected by the Lewis and Clark expedition in 1805.

Active in a 300-member association of American Indians who travel the Northwest to harvest weaving materials and share techniques, Courtney Gold notes with pride, "It's a family activity that helps preserve our tribal heritage." Similar native weaving groups have evolved in other regions of the United States.

Curator Bruce Bernstein writes that woven baskets are differentiated into wicker, plaited and twined, and sewn baskets are referred to as coiled.

These four basket-making weaves are found worldwide, and baskets from various countries often resemble each other. Still, the origin of a basket is always discernible from materials, rim finish and designs, he said.