Los Angeles — Entertainer Donald O'Connor, who combined comedy and acrobatics in the show-stopping "Make 'Em Laugh" number in the classic movie "Singin' in the Rain," died Saturday, his daughter said. He was 78.

O'Connor, who had been in declining health in recent years, died of heart failure at a retirement home in Calabasas, his daughter, Alicia O'Connor, told The Associated Press.

In a brief statement, the family said that among O'Connor's last words was the following quip: "I'd like to thank the Academy for my lifetime achievement award that I will eventually get."

O'Connor won an Emmy, but never an Oscar. He was best-known for films he made in the 1950s -- a series of highly successful "Francis the Talking Mule" comedies and movie musicals that put his song and dance talents to good use.

"He was such a fine man and was one of the great ones," actor Tony Curtis said Saturday.

Songs in movie musicals are often touching or exciting, but O'Connor performed a rare feat with a number that were laugh-out-loud funny.

The best, 1952's "Singin' in the Rain," also starred Gene Kelly and Debbie Reynolds and took a satirical look at Hollywood during the transition from silent to sound pictures.

As he sings "Make 'Em Laugh," O'Connor dances with a prop dummy and performs all manner of amusing acrobatics.

"Someone handed me a dummy that was on the stage," he recalled in a 1995 Associated Press interview. "That was the only prop I used. I did a pratfall and we wrote that down. Every time I did something that got a laugh, we wrote it down to keep in the number." 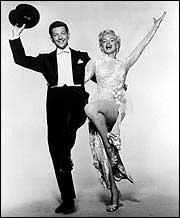 Donald O'Connor, left, and Marilyn Monroe step lively to an Irving Berlin tune in "There's No Business Like Show Business," in 1954. O'Connor died Saturday of heart failure. He was 78.

The American Film Institute's list of the top 100 American movies ever made ranked "Singin' in the Rain" at No. 10.

"He was incredible, a consummate performer. Always entertaining, always talking, always laughing," said Tim Fowlar, his musical director for 30 years. "He loved to perform and that's pretty much all he knew."

Among O'Connor's other '50s musicals were "Call Me Madam," "Anything Goes" and "There's No Business Like Show Business."

He said it was a fluke that he landed in so many musicals, noting he started out as a "straight" actor. He also said his song-and-dance image came with a downside.

"Back then, when you were typecast that way, it was very difficult to get dramatic parts," he recalled. "Look at Fred Astaire, who was a darn good actor."

The "Francis" comedies, which featured a bumbling O'Connor and a talking mule, began in 1949. A few years later, the man who directed them created the "Mr. Ed" TV series.

O'Connor quit the "Francis" series in 1955, saying, "When you've made six pictures and the mule still gets more fan mail than you do ...."

O'Connor also had some success in television. He won an Emmy for "The Colgate Comedy Hour" in 1954 and appeared in "The Donald O'Connor Texaco Show" from 1954 to 1955.

Born in Chicago to circus performers who went into vaudeville, O'Connor joined his family's act when he was an infant. He made his film debut at age 11 in a dancing scene with two of his brothers in "Melody for Two."

Gene Kelly plants a kiss on the cheek of "Singin' in the Rain" co-star Donald O'Connor at a 1990 gala benefit in Beverly Hills, Calif.

When he grew too big for child roles, he briefly returned to vaudeville, but was soon back in Hollywood playing high-energy juvenile leads opposite such actresses as Gloria Jean and Susanna Foster.

In recent years, he continued working when he found a project he liked, such as appearing in an episode of "Tales From the Crypt."

But he said he had little desire to leave home -- in Arizona -- for long stretches.

"Revivals are so popular now. But doing one would mean being out in cold, cold New York for a year, a year and a half," he said. "I'd rather do something where I go in and work a week, maybe three days. Get it done and come back home."