More than a hobby

Don't call it a hobby.

For three Lawrence area residents and members of the Lawrence Potter's Guild, pottery is much more than that.

"I am almost offended when people call it a hobby," vents guild member Betty Lessenden.

Two fellow members, Helen Martin and Betty Gates, share her frustrations with the classification of hobby.

Martin feels a sense of obligation to her passion.

"It is definitely more than a hobby," she says. "It is something that I have to do."

"It is more of a self-supporting obsession," says Gates about their shared craft.

The ladies have been hard at work preparing work for the upcoming annual Potter's Guild sale. The sale, which will feature work by about 12 guild members, will be at the new Lawrence Arts Center with proceeds benefiting both the guild and the arts center. 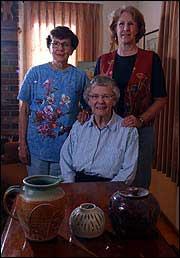 From left, Helen Martin, Betty Lessenden and Betty Gates are Lawrence potters who will showcase their work Saturday during the Lawrence Potter's Guild annual sale at the Lawrence Arts Center, 940 N.H. The women displayed some of their favorite pieces recently at Lessenden's west Lawrence home.

There are several ways to create art from clay, but these women often use a pottery wheel and "throw." Though they may enter into the process with a general idea of what they want the final product to be, it is constantly changing.

Lessenden acknowledges the medium itself can be the greatest determinant.

"The clay often dictates what the shape is," she says. "The form dictates the glaze."

Lessenden experiments with many different forms, such as lidded jars, pitchers and bowls. The creates the forms by hand but uses other items to give her pieces a distinct look.

"We use objects more for texturing the outside of the clay rather than for molding," says Lessenden.

Gates often uses objects found in nature to create the unique looks of her pots.

"I have used pebbles and even stuck clay on tree bark to get the right mold," she says of her work, which includes pitchers, among other things.

When the women are satisfied with their forms, the work is ready for glazing and firing. Martin likes to salt fire. Performed in a special kiln, this type of firing uses salt that adheres with the silica in the clay. Martin applies salt to the wet clay before firing. The unique color is created from this cohesion.

"The salt gives it the final coating and really becomes a part of the of the clay piece, not just something you put on the surface," explains Martin, who will be selling candle holders and other items at the Potter's Guild event.

When the object is placed in the kiln for the final firing, anything can happen.

"Don't get too attached to a pot until it comes out of that final glaze," advises Gates, "because anything can happen. You just never know."

You gotta have friends

Throughout 30 years of creating pottery, the women have faced all kinds of interesting situations. The bonds they have formed with other potters have helped them along.

"Potters are a strange lot," Lessenden says. "We all help each other."

Gates says belonging to the guild has helped her solve problems.

"We can go to any of the people and say, 'This is happening,' and someone will be able to help," she says.

The bottom line is that the guild offers its members an opportunity to congregate and share their passion for clay. Although they only get together a few times a year, members lean on one another for support.

"Sometimes you open the kiln, and you are like, 'WHAT?'" Gates says. "That is when you go back to your friends and say, 'What's up with this? HELP.'"

Always anxious to share their craft with those who are willing to learn, the women and other guild members encourage people with an interest in pottery to join.

Gates has a message to impart to anyone who may be interested: "We want to really encourage younger people to come with us. We are not just a bunch of old ladies."