Larry Schwarm is blessed. He can find and capture beauty in landscapes most Kansans take for granted.

He's especially fond of the Flint Hills in early spring, a time when ranchers, like the American Indians before them, set fire to the previous year's grasses to hasten new growth. 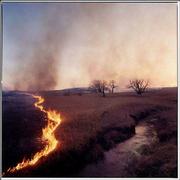 "Earth, Fire and Water, Z-Bar Ranch, Chase County, KS." is one of the photographs of the Flint Hills that appears in a new book, "On Fire" to be published by Duke University Press.

Next month, Duke University Press will publish "On Fire," a stunning collection of Schwarm's photographs.

Schwarm grew up in Greensburg, but his fascination with prairie fires began 14 years ago in Oregon.

"It was after summer teaching, and I was driving through south central Oregon on my way to Seattle," he said. "There was a forest fire about 30 miles away that had filled the sky with smoke in a way that was very interesting, visually. I knew they burned the prairie around where I lived, so I made a mental note to check it out."

He took his first prairie-fire photograph on March 15, 1990. "I was completely enthralled ... mesmerized," Schwarm said. "I've been passionate about it ever since." 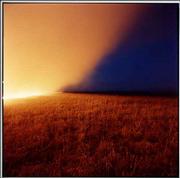 Both of this image and the one below are of prairie fires near Cassoday. The photographs can be found in "On Fire," a book by photographer Larry Schwarm.

It's a passion that is, without apologies, pure Kansas.

"You know, it's funny," he said. "I just got back from some places along the California coasts that were absolutely gorgeous. But I wasn't all that interested in photographing them; they didn't touch my soul the same way the desert does or that the Flint Hills do.

"A lot of that, I think, is because I grew up in Greensburg, where it's flat and featureless -- where the slightest curve in the horizon becomes a landmark. Those are the landscapes I gravitate to."

Schwarm, 59, is no stranger to Lawrence. He arrived at Kansas University in 1964, later earning a bachelor's degree in sculpture and, in 1976, a master's in design with an emphasis in photography. 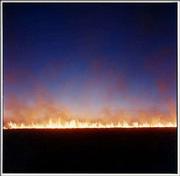 He was staff photographer at KU's Spencer Museum of Art for two years before moving to Milwaukee for a job in commercial photography.

"After eight years there, I was offered a teaching job at Emporia (State University), which was something I'd never done before," he said. "But I thought it would be interesting, and I was anxious to get back to Kansas and back into art." He moved to Emporia in 1988.

Schwarm makes monthly trips to Lawrence -- "For restaurants and movies," he said -- but he thrives on Emporia's not-so-hectic pace.

"I've found that not being in such a wildly competitive place like, say, Chicago, allows me to think about what it is that I do," he said. "It allows me to grow in my own direction."

While in Lawrence, Schwarm ran Frame Up, a picture-framing business at 14 E. Eighth St., for several years.

"I still love Lawrence," he said. "It's changed a lot since I was there, but in many ways it's exactly the same."

Schwarm's photographs were selected from more than 500 submissions.

His photographs also are in the permanent collections of the Smithsonian American Art Museum, the Philadelphia and Milwaukee museums of art and the Spencer at KU.

"Somehow, Larry has found a way to take a difficult subject -- the prairie, which is essentially land, horizon, sky and fire -- and make incredible pictures. He makes simplicity seem monumental," said John Pultz, curator of photography at the Spencer.

Schwarm will be in Kansas City, Mo., next month for a book signing, and a Lawrence book signing is being planned.

"Oh, definitely. I would love to have one," said Pat Kehde, owner of The Raven Bookstore, 6 E. Seventh St. "I'm calling Duke (University Press) right away."