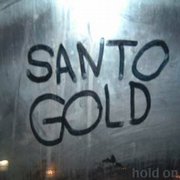 Santo Gold plays an adventurous, dark brand of guitar rock that recalls bands like Fugazi and the Minutemen or -- on a local level -- Vitreous Humor and Zoom. The band's second EP shows lots of promise, though it suffers from inconsistency.

At their best, Santo Gold demonstrates an ability to mix clashing guitar lines with creative song structures and a healthy dose of feedback. The band thrives on complex interplay between the bass and guitars, while the vocals -- often distorted and buried -- sometimes seem like afterthoughts. Only four of the six songs have vocals and one of the instrumentals is a two-minute ambient guitar interlude.

Track two, "Eat the Rich," is the most interesting song on the EP, with two lead vocalists and soaring lead guitar lines. The song twists and turns through four minutes of unpredictable chord changes. Track five,
"Landing Blows," is another highlight, though it doesn't develop much beyond the killer opening guitar hook.

The production is palpable but leaves room for improvement -- too often the snare and bass drums sound like they were made of cardboard. The whole project has a lo-fi feel that can be either charming or annoying, depending on your sensibility. Either way, for a band that can rock a house party like few can in Lawrence, Santo Gold hasn't quite translated that live experience to the recording.