By By Deepti Hajela - The Associated Press

"Her contribution to the civil rights movement was done with her tennis racket," Gray said.

"Who could have imagined? Who could have thought?" Gibson said in 1988 as she presented her Wimbledon trophies to the Smithsonian Institution's National Museum of American History.

"Here stands before you a Negro woman, raised in Harlem, who went on to become a tennis player ... and finally wind up being a world champion, in fact, the first black woman champion of this world," she said.

The eldest of five children, Gibson was a self-described "born athlete" who broke racial barriers, not only in tennis but also in the Ladies Professional Golf Assn.

Gibson was born Aug. 25, 1927, in Silver, S.C. She picked up tennis while growing up in New York, slapping rubber balls off a brick wall. She then met Fred Johnson, the one-armed tennis coach who taught her to play. 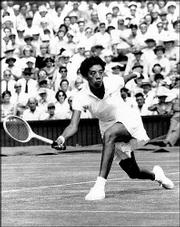 Althea Gibson makes a return to Darlene Hard during their title match at Wimbledon, which Gibson won 6-3, 6-2, on July 6, 1957. Gibson, a champion tennis player in the 1950s who was the first black player to win Wimbledon and U.S. national titles, died Sunday. She was 76.

She spent high school in Wilmington, N.C., where Dr. R.W. Johnson took her into his family's home and let her play on his grass court. Dr. E.A. Eaton coached her there, and Gibson would later credit him with helping cultivate the grace and dignity she needed on and off the court.

"No one would say anything to me because of the way I carried myself," Gibson said. "Tennis was a game for ladies and gentlemen, and I conducted myself in that manner."

Arthur Ashe would later become the first black man to win the U.S. Open and Wimbledon. More than 30 years passed before another black woman, Zina Garrison, reached the final at Wimbledon in 1990. Venus Williams won the tournament 10 years later, and her sister Serena won the U.S. Open in 1999.