Los Angeles — The California recall -- a combination of star vehicle, peep show and political game of chicken -- has gotten unprecedented national TV coverage for a statewide election, receiving more airtime on the Big Three networks than the White House race.

From Aug. 1 through Sept. 25, the nightly newscasts on NBC, ABC and CBS devoted a total of 127 minutes to the recall, said Andrew Tyndall, who monitors TV news for his Tyndall Report newsletter. In that same period, the Democratic presidential contenders received a total of 36 minutes.

That represents unprecedented national airtime for a statewide election, Tyndall said. In 2002, the networks gave all gubernatorial races nationwide a combined 40 minutes of attention for the year.

The world is watching, too, fascinated with Austrian-born Arnold Schwarzenegger's metamorphosis from Hollywood action star to pol.

TV host Chris Matthews has relentlessly tracked the recall campaign on his daily MSNBC show "Hardball" and on the syndicated "The Chris Matthews Show," even temporarily relocating from the East Coast to the West Coast.

Such coverage is necessary because of the national and worldwide interest, he said.

If Schwarzenegger wins the governorship on Oct. 7, "on Oct. 8 every newspaper -- in Santiago, in Rangoon, in Islamabad -- is going to have it as an item on the front page or in the front section," Matthews said.

In a CNN-USA Today-Gallup poll conducted Sept. 19-21, respondents were asked if they were paying more attention to the 2004 presidential election or to the recall. The recall was cited by 44 percent, the national election by 37 percent, said CNN senior political analyst Bill Schneider. 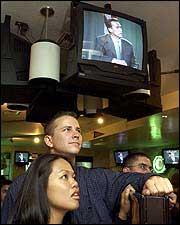 Students at Sacramento State watch a televised debate among the five top California gubernatorial candidates vying to replace Gov. Gray Davis, in a campus restaurant in Sacramento, Calif. The California recall -- a combination of star vehicle, peep show and political game of chicken -- has gotten unprecedented national TV coverage for a statewide election, receiving more airtime on the Big Three networks than the White House race.