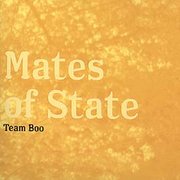 Mates of State's gimmicky two-piece organ/drum sound can be at once captivating and grating. When it works, the instruments take a backseat to the lovely vocal interplay between drummer Jason Hammel and organiist Kori Gardner -- then, all is Zen.

When it doesn't work, you begin to wonder if you're trapped in a spinning carnival ride. But you can't fault the duo for trying to make their sound stick out among today's gimmick-splattered musical landscape. I mean, would anyone really care about the White Stripes if they had a bass player and some dude rockin' the kit? As far as gimmicks go, Mates of State (even not at their best) are certainly less annoying than Har Mar Superstar or Fannypack.

Which brings us to the music (and I won't use the word 'gimmick' again). The fact is, Hammel and Gardner can sing like doves and bust rhymes like rap stars ("THIS COULDN'T BE MORE GHETTO!" they exalt on "I Got This Feelin'"). Their songs never stay in one place long enough to get boring, and they add enough incongruous touches (horns on "An Experiment," real piano on "Parachutes") to keep things interesting. Musically, Gardner's two-handed keyboard wizardry is downright Dumbledore-like, and Hammel can hammer with the best of them.

Mostly, "Team Boo" succeeds because its lyrics avoid the trappings of the cutesy cliches that could easily slip from the mouths of two singing lovers. The album's most poignant moment comes during "Parachutes (Funeral Song)," a piano-based tune about two lovers taking a parachute leap on their wedding day. "I'd say I'm better 'cause I lived before I died / At least I know you tried" sings the bride (presumably after her parachute fails to open).

I imagine Mates of State are a pretty polarizing band. If you didn't like their first two albums you probably won't like this one either. But if you were on the fence, maybe this one will bring into their lovely little world.