Hellboy, right, (played by Ron Perlman), takes on one of the many monsters dreamed up by creator Mike Mignola. The author first launched the "Hellboy" series in 1993 after years spent drawing superheroes for DC and Marvel Comics.

Most people have nightmares about monsters. For comic creator Mike Mignola, monsters are the stuff of pleasant dreams.

"I don't remember ever being particularly scared of monsters," says Mignola of his childhood. "I remember being fascinated that my cousin was in the next room watching 'Dark Shadows' and we weren't allowed to go in there when it was on. So, of course, we sat outside the door conjuring up something much better than what he was actually watching."

Mignola still employs the same artistic ingenuity -- only now he does it for a living.

In 1993, Mignola conjured up the character Hellboy for fledgling publisher Dark Horse Comics after years spent drawing superheroes for Marvel and DC. A decade later, the demonic-looking, working-class tempered hero (played by Ron Perlman) can be found vanquishing all sorts of sinister monsters at the multiplex. The $60 million adaptation of "Hellboy" opens in theaters today.

"Obviously, I was very nervous about the core audience -- the real 'Hellboy' fanatics -- because this story differs from the story I told in the comic," Mignola says, speaking from a hotel room in his native California.

"I would say that the nicest response that I've gotten is people saying, 'It's so true to your character.' I'm glad they didn't fixate on what's different. And they appreciated that in the hands of another director or another studio it probably would bear no resemblance (to the comic) whatsoever."

For several years Mignola and Mexican filmmaker Guillermo del Toro ("Blade II") had tried to get their quirky cinematic project off the ground. The pair was bombarded with "suggestions" from various producers about changing Hellboy: "Does he have to be red? Does he have to have a tail? Can he just become Hellboy when he's angry?"

"I made it very clear to Guillermo when we first met that I liked him and liked his movies and I would be very content to let him change Hellboy in any way he saw fit," Mignola recalls. "I'm not one of these guys who said, 'It's got to be my character on the screen.' In a way, the more he changed it the easier it would be for me to deal with, because it became a separate entity."

A few of Guillermo's alterations -- thankfully, not the studio's -- were necessary when condensing the many graphic novels into one unified debut. Among them, Hellboy was revised from being an accepted public figure to a shadowy agent working for a government bureau that doesn't officially exist. And a love interest was also added -- a disturbed fellow operative named Liz (portrayed by Selma Blair) who can start fires with her mind.

But for Mignola, these were cosmetic changes as long as the movie remained able to nail the most crucial factor.

"It put the personality of my character on the screen," he enthuses. "Even though we knew the one actor who could do that, I was still overwhelmed with joy when I saw the finished picture and said, 'That guy sounds like my guy. That guy acts like my guy. It's got the heart that I always imagined my guy having.'"

"I've always felt that Mike Mignola sits down to a drawing table and says, 'What would Jai Nitz like to read today?' says Lawrence-based comic book author Jai Nitz.

Nitz, a KU grad, actually got the chance to team up with Mignola recently when he was hired to write an original Hellboy story to be included in the pages of a role-playing game guide based on the character. Mignola was pleased with Nitz's ideas involving Indian mysticism and a "creepy monster with no head and a face in its stomach." 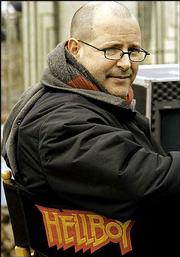 Mike Mignola, creator of "Hellboy," finally sees his cult comic book character adapted for the big screen. Mignola also serves as an executive producer on the film, which gets released today nationwide.

Nitz believes Hellboy is a perfect character to make the leap to feature films, "Because it's a good basic concept that everybody can wrap their head around."

Having been through the experience of seeing his characters come to life, the 43-year-old Mignola is fairly certain the theatrical version of "Hellboy" will not affect how he approaches future print editions.

"I'm not going to consciously change anything in the comic to be closer to the movie," he says. "I'm not going to introduce a love interest between Hellboy and the Liz Sherman character. I've split them into two different comics so there's a chance they may never meet again in the comics. But there is a scene in the new 'Hellboy' comic that in some way was very much inspired by sitting around and listening to Ron Perlman tell stories. It was like I got a glimpse of Hellboy in between adventures -- Hellboy hanging out."

Out of the murky depths

Right now Mignola and Hellboy really are just hanging out. Both the author and his fictional creation are in a state of creative limbo until all the hoo-ha from the film's premiere dies down.

"Theoretically, when I get back to New York I'm going to go back to work on 'Hellboy.' For the last year, Hellboy has been stranded at the bottom of the ocean ... Actually by stranding him there, on some weird psychological level it felt like, 'With all the movie stuff going on, the best place for you now is at the bottom of the ocean. No one will find you. If things go wrong you'll be lost and never heard from again. You just stay there among the coral and the crabs until I come and get you when this whole movie thing blows over.'