Its manifesto: Take a dozen or more struggling artists, throw them into a storied downtown Lawrence space, pool their money to pay rent, let them share wisdom and paint jars and give them a space to sell their art.

Also like Communism, the Grimshaw Gallery worked better in theory.

"It was just too large to control," said resident artist Brendan Lattin. "Eventually it just collapsed."

The popular artist's collective/studio next at 731 N.H. is closing, or at least undergoing a major overhaul. Tension between landlord Schuyler Lister and the building's tenants led to a fallout between the two parties and the abrupt closing of the gallery.

"For all purposes, all the resident artists have left -- we're done," said co-director Jay Gordon. "(The landlord) may decide to continue on with the name, but if so it'll be a very different atmosphere."

Lister -- a downtown retailer who owns Creation Station and managed Paradise Cafe before recently closing the restaurant -- could not be reached for comment.

According to members of the collective, Lister changed the locks on the doors and bordered up the back entrance, effectively keeping the artists out of the building.

"He wanted rent from us but at the same time he was kicking people out, making it a lot more difficult for us to collect the money," Gordon said. "(He was) basically holding our stuff for ransom until we paid him."

The Grimshaw had served as a studio space and gallery since it opened Jan. 31, 2003, in the space previously occupied by The Chapman used goods store. The gallery hosted a steady flow of art shows and other curious spectacles, such as a traveling puppet show, performance art happenings and benefit shows.

Together with The Olive Gallery and a number of independent house shows, the gallery helped create a forum for D.I.Y. local artists, many of whom displayed their work during September's triumphant "Red Balloon To Do" gallery walk.

Though the gallery may have closed in an uglier fashion than most of the residents would have liked, its demise didn't come as complete surprise to all.

"I had seen it coming for awhile," said Kali Damon, a painter who had been working in the space since July. "There were a few fights in there and it was just a little too tense for most of the inhabitants ... It just wasn't a good working environment anymore. It wasn't the community that we had wanted it to be."

Gordon said the Grimshaw's troubles were heightened by conflicts among its residents, some of whom had begun to take up residence at their studio spaces.

"For the most part we were just trying to get by and make rent so we couldn't be as selective with who we let in, and that led to a lot of problems," he said. "That's certainly one thing that destroys a working environment, when you walk in and you see somebody crashed out on the couch."

Despite the occasional conflict within, former in-house artists of the Grimshaw spoke fondly of its communal atmosphere.

"If you'd ever attended a Grimshaw meeting, they were amazing, like, the kind of rapport that people had and what we were talking about," Lattin said. "There was something about that place that was just kind of haunting ... It was more than just a space to work; it was a place to ponder." 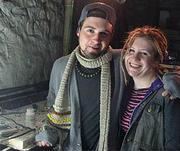 Co-director Jenny Long, who plans to move to Seattle with Gordon in August, said she felt proud of all the gallery was able to achieve in 14 months.

"(I think we proved) you don't have to wait for somebody to come along and be like, 'Here, have a show at our gallery,'" she said. "You have the means; make it happen yourself."

Damon said she was mostly upset that the gallery had closed so abruptly.

"I would have loved to at least have had a going-away show and let the public know properly," she said. "I mean people just go by there and there's no more art in the windows and I'm sure people are wondering." 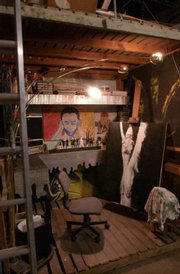 An artist's studio at the Grimshaw. 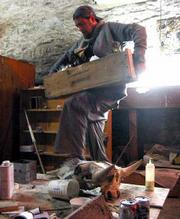 Jay Gordon packing up his materials, preparing to move.

The last pieces of art still hanging in the gallery side of the Grimshaw. 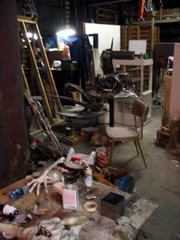 A view of the artists' studio side of the Grimshaw.

The window looking out to New Hampshire street.