For some of us, the mere mention of "knitting" will forever conjure up images of Christmas mornings past, filled with ill-fitting monstrosities and smiles of faux excitement.

Genevieve Payne, of Lawrence, browses through racks of colorful twisted yarn at the Yarn Barn, 930 Mass. More and more young women -- and a few men -- are picking up the needles and learning to knit and purl.

"Gee, Grandma, you read my mind. I've been hankering for a five-piece set of fuchsia, double-knit Kleenex-box covers since Labor Day."

Sarcasm aside, however, knitting has always had its heart in the right place. Handmade gifts carry special significance because of the personal effort put into them. And this time-honored truth is finding new life among young, urban women, who are pursuing their creative leanings with serendipitous abandon.

Knitting, one might say, has sewn its way back into the seam of cool.

"You don't have to be a slave to consumer culture when you knit," says Caterina Benalcazar, 28. "I like how it's almost kind of rebellious."

Benalcazar, a Kansas University student and local barista, has been knitting for about a year. She was "reintroduced" to the hobby by a friend, who happens to be a young, female professional.

"I avoided my mother's efforts to teach me how to knit for years," says Benalcazar, sporting a funky scarf made from green eyelash yarn. "I thought it was a way to keep women in their place -- like how cooking used to be.

"But now I see it as kind of a way to stroke your own ego. You feel pretty good about yourself after finishing that first knitting project."

My place or yarn?

Mary Margaret Ryan, who works at Yarn Barn, 930 Mass., says she sees an increasingly younger demographic at her store.

"We get a lot of young people coming in who have never knit before," says Ryan, 26. "They're excited about learning and creating."

"We get everyone from beginners to the advanced," Ryan says, "and that includes girls and guys."


Men are into knitting, you ask?

Some men find an element of competition in knitting; others, she says, just find it relaxing.

"For some it's kind of Zen, but others definitely want to 'out-knit' the next guy," Ryan says.

Anna Oyler, a Yarn Barn employee and "weaver converted to the dark side of knitting," says about one in 20 customers is male, though that population isn't immune from the occasional poseur.

"My male friends like to joke about Yarn Barn being a great place to pick up chicks," says Oyler, 27. "All that female foot traffic gets them hot and bothered." 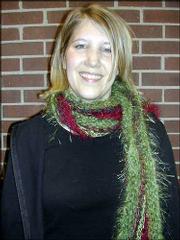 Yarn yuppies on the Web, however, are quick to defend the indiscriminate appeal of a big knitter's needle. A simple Google search yields dozens of hits for "Russell Crowe and knitting" -- the surly leading man, it would seem, has Hollywood abuzz with his "fetish" for yarn-play between takes on the movie set.

But Crowe gets only partial credit for Benalcazar's fresh appreciation of knitting. She cites friend Elissa Harris, a Lawrence resident and advertising agency employee, as her personal "Yoda of yarn." Harris taught Benalcazar and a group of female friends the basics of knitting last year.

"I've been knitting for about three years, and I thought my friends would enjoy it, too," says Harris, 31. "I like trying to duplicate what I see in the stores and making things for other people."

Harris, who learned to knit at an eight-week Yarn Barn course, says the traditional hobby has modern significance in her life.

"I know some women see it as anti-feminist and all that," she says, "but for me, it's the exact opposite. Knitting is about connecting with other women across generations."

Oyler says the resurgence of knitting may also find roots in an uncertain economic climate, where people want tangible assurance that self-sufficiency, if necessary, could be achieved. 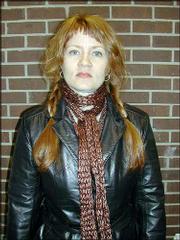 "There are people who like to know they can make something from nothing," she says, "so if society were to fall apart, they could grab a sheep, shear it, spin it and knit it."

Bunkers full of wool notwithstanding, Oyler concedes most knitters are in it for the relaxation, and, yes, a snazzy scarf.

"People just kind of zone out and knit," she says. "It feels good, and with all the funky new yarn out there, you can finish a small project relatively quickly."

Eyelash and glitter yarns, Oyler says, are the strands of choice for knitting hipsters in Lawrence.

"Glitter yarn is especially easy for beginners to handle because it doesn't require any purling -- just straightforward knitting," she says. 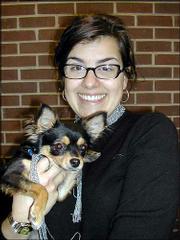 The purl stitch is a knit stitch reversed, which translates to "more complicated and more work," Oyler says. She advises people to get comfortable with the basic knit stitch before launching into any yarn histrionics.

Benalcazar, however, offers her own "purl" of wisdom for needlework newbies: Grab a friend and treat knitting like an extension of socializing, she says. You'll learn faster and have more fun.

"Knitting is liberating, believe it or not," Benalcazar says. "That's worth sharing with the girls."

Or, as a certain on-screen gladiator might argue, the guys.