Laughter may be the best medicine. 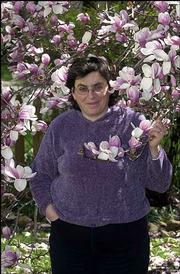 Lawrence poet Caryn Mirriam- Goldberg, shown here in front of a magnolia tree, will read her work Friday at the Lawrence Arts Center during the second installment of the 2004 Lawrence Poetry Series. One of her recent poems is about magnolia trees.

Turning out heaps of verse helped her survive turbulent teenage years, fractured by her parents' messy divorce. It was also a crucial lifeline during her battle with breast cancer, which began with a diagnosis in March 2002.

About 12 years ago, Mirriam-Goldberg took her belief in writing's healing powers a step further and began offering community workshops, often to other cancer survivors.

The response has been affirming.

"When you're facing a very serious illness, you feel like you lose so much of your voice ... And, especially with cancer, you don't always have any symptoms and then boom, you find out there's something there that can kill you," says Mirriam-Goldberg, who in a few weeks will receive her certification as a poetry therapist. "It kind of really skews reality.

"So this is a way for them to create their own reality or take reality back."

Mirriam-Goldberg will read a few of her poems about living with breast cancer Friday evening during the second installment of the 2004 Lawrence Poetry Series. Kansas City, Mo., poet Philip Miller will join her for the event at the Lawrence Arts Center, 940 N.H.

Mirriam-Goldberg, who's been living and working in Lawrence since 1983, doesn't restrict her writing to reflections on her health, nor does she stick to poetry exclusively. "I'm kind of a genre slut," she jokes.

She published her first poetry collection, "Lot's Wife," in 2000. In it, women from the Bible, mythology and fairy tales tell their side of the story. Her second collection will be released by Washburn University's Woodley Press in the coming weeks.

She's working on a memoir about living with cancer called "Breastless." She'll be in California in a few weeks for the National Association for Poetry Therapy conference, where she'll do a spoken word performance about spirituality with a Denver poet.

"She's a Christian poet, and I'm a Jewish poet with kind of freelance Buddhist leanings, and we have basically written poems back and forth exploring our faiths and trying to find a common language of the curious," Mirriam-Goldberg says.

The list of upcoming projects goes on and on.

When she's not busy being a mother or poring over the packets of writing she receives every few weeks from her students at Goddard College (she directs the transformative language arts program at the university in Plainfield, Vt.), Mirriam-Goldberg often can be found in a downtown coffee shop, headphones strapped on, writing new poetry on her laptop.

She finds it difficult to negotiate a balance between the workshops she conducts with other people and holding her own space for writing.

"So I guess about six months ago I instituted 'Write and Wander Wednesdays' where I try as much as possible to do nothing but work on my own writing for one whole day a week," she says. "It helps me to move into that space where I'm deeply enough involved in revision that I can actually get somewhere."

Mirriam-Goldberg's poetry has been published in numerous journals. She's also author of "Write Where You Are: How to Use Writing to Make Sense of Your Life" (Free Spirit Press).

For several years she organized a local poetry reading at Pywackets, a downtown coffeehouse that's been reincarnated several times and now is home Z's Divine Espresso. Another way she interfaces with the community is by doing Poems on the Spot. Most recently she set up her laptop at the Bizarre Bazaar and fulfilled people's requests for poetry about their marriages, families or friends experiencing illness.

She also makes up poems spontaneously when she does readings, and Friday's appearance will be no exception.

"I ask the audience to yell out words, and I make up something right there," she says. "I do this, in part, to interact with the community, but also to help free the form a little bit more.

"Poetry doesn't have to be this very refined, hidden-away, obscure art that just a few people do."

"I see a poem as almost like a house: You want enough doors and windows open that a reader can come in and look around, and then just by all the details in the poem -- by the sounds, by the images -- feel like they inhabit it," she says.

"Or at least they're having a good visit."