Beneath the bridge above the muddy banks of the Wishkah River, a troubled young Kurt Cobain would come to escape his unhappy home and the persistent gray drizzle of the Washington coast.

Among the cracking concrete supports, he would smoke pot and drink and plot his stardom, bragging to friends of his "suicide genes" and that he would die a young rock star. 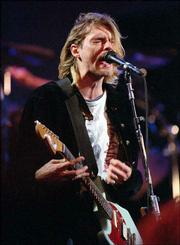 Kurt Cobain performs in this Dec. 13, 1993, file photo during the taping of MTV's Live and Loud Production in Seattle. Cobain committed suicide April 5, 1994.

It's here that many of his fans have come to pay their respects since he fulfilled that prophesy with a needle and a shotgun 10 years ago today.

"Peace, love, empathy," reads one message scrawled in graffiti under the bridge.

Cobain and his band, Nirvana, spent only three years in the public eye, and they released only three studio albums. But what he accomplished before committing suicide at age 27 -- deciding it was "better to burn out than fade away," as he quoted Neil Young in his suicide note -- was remarkable.

Critics describe 1991's "Nevermind," which has sold more than 10 million copies, as one of the decade's most important albums. Its biggest hit, "Smells Like Teen Spirit," remains a seminal expression of teen angst. Cobain brought the dark, driven sound of grunge rock to the nation, helped save the world from hair metal, and with a single line -- "Here we are now, entertain us" -- captured and captivated a generation.

Much of the screaming desperation in Cobain's songs can be traced to his life in this timber town on the Washington coast. Cobain's parents divorced when he was 9, an event that scarred him deeply, and much of his adolescence was spent bouncing among the homes of his parents, grandparents, relatives and friends.

Cobain found an outlet for these emotions in guitar, punk rock and painting, through which he would express himself for the rest of his life. He spoke frequently during the last two years of his life of giving up music for painting.

Shortly before he dropped out of Aberdeen's Weatherwax High School, Cobain began playing with classmate Krist Novoselic. They formed Nirvana after moving to Olympia in the late 1980s, and drummer Dave Grohl, now of the Foo Fighters, joined the band in 1990, the year Cobain began taking heroin, and the year Nirvana's first album, "Bleach," helped it win a major label deal with DGC.

Over the next year, Nirvana -- and grunge -- exploded onto the national stage. As his fame soared, though, so did his heroin use, in part as a self-treatment for his chronic stomach pain. Encouraged by his wife, Courtney Love, who had her own drug problems, Cobain checked into detox several times over the next 2 1/2 years.

On April 5, 1994 -- give or take 24 hours -- Cobain wrote a suicide note, in which he said he couldn't stand to think of his daughter becoming "the miserable self-destructive, death rocker that I've become." He went into the greenhouse of his mansion, injected himself with a massive dose of heroin and shot himself.

There is no widespread event planned for the 10th anniversary of his death, though some fans communicating on the Internet have suggested meeting at Seattle Center. Others will come here, beneath the Young Street Bridge, or to the benches at Viretta Park, next to Cobain's house in Seattle, where some of his ashes are scattered.