By By Chris Wristen 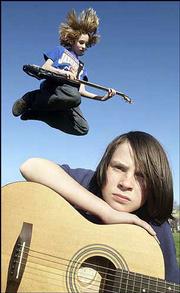 Walter Morris, 12, foreground, and his bandmate Nick Blessing, 13, will perform May 16 at Liberty Hall to help raise $500 for their friend Rose Naughtin's air ambulance bill. Rose is on a waiting list for a second heart transplant. Walter and Nick, who play in the punk band Living Rdkil, are pictured Friday at Central Junior High School, 1400 Mass.

Both were 4 years old at the time, and Walter knew only that his friend from across the alley was pretty sick and needed a long recovery before she could come out to play again.

Now 12, Rose once again can't come out to play. She found out about a month ago she needs a second heart transplant. She hasn't been to school in four weeks. She can't hang out downtown, go to movies or shop with friends very often because her health is fading.

There isn't a donor yet, so each day begins with optimism that good news might arrive. Rose gets chills every time the phone rings, hoping it's the call. When it finally comes, she'll be gone in a flash -- off to St. Louis to have surgery and begin the long road back to normalcy.

"I've got one of my bags packed just in case we get a call and have to go right away," she said.

Getting to St. Louis won't be easy, though. The Naughtins have insurance, but it doesn't cover every expense. Once a donor is found, Rose will be airlifted to St. Louis to have the surgery. The flight costs about $500 and is not covered by insurance. Some additional expenses aren't covered either.

Walter said he wanted to help alleviate the Naughtins' burden. A member of the rock band Living Rdkil, he is organizing a benefit concert May 16 at Liberty Hall to try to raise the money for the airlift.

"We think it's just kind of our duty to do this," Walter said of the benefit concert. "It doesn't seem like much."

The gesture is typical of the young man, Rose's mother, Paula, said, and it exemplifies the type of friend he's been to the neighbor girl across the alley during the 10 years they've known each other.

"He's been a great friend to Rose for a long time," Paula Naughtin said. "He called up fairly soon after we heard she needed the transplant and he asked 'Does Rose have insurance? Is it enough to pay for the transplant?' It's extraordinary for a 12-year-old to get it all together."

Walter knew the Liberty Hall booking agent and got approval to do the show. Since then he's been busy lining up bands and promoting the event. Living Rdkil, which also features Central Junior High school students Nick Blessing and David Liston, will share the stage with local acts Gourmet Mushroom X and Vibralux, who have tentatively agreed to the show, Walter said. A cover price hasn't been determined, but all proceeds will go to Rose. A few downtown businesses also have donated items for a raffle, including a guitar from Richard's Music Co.

"I think it's going to be a pretty big show," Walter said. "I'm thinking somewhere around 250 people, maybe 350 people. There'll be a lot of people from school and a lot of grownups."

There may be far more than that at the 1,050-seat capacity venue, given the vast number of friends sponsoring benefit events for Rose. The Community Mercantile is conducting a dinner April 26 at the Ecumenical Christian Ministries building, 1204 Oread Ave. Local band Shaggy Haired Outcasts will have a benefit concert May 6 at Abe & Jake's Landing, 8 E. Sixth St.; band member Marshall Rake, a Free State sophomore, said Andrew Conner and Getaway Driver also planned to perform.

"We have an incredible amount of support from our friends, Rose's doctors, a lot of people at the Midwest Transplant Network, and so many wonderful people," Paula Naughtin said. "They've been real nice and are doing all that stuff so we don't have to think about it."

Walter said he'd be ecstatic if everyone who knows Rose or has been touched by her story comes to the concert. He said it would be "a cool feeling" to vibe in front of a packed house on the same stage where current rock superstars Jet and The Vines jammed last week, but he said his greatest hope was that an overflow crowd would mean more money to support one of his best friends. That, he said, is all he really cares about.

"Any extra dough we make," Walter said, "we're just going to give to her for cash for once the operation is done and she's recovered, just for her to go out and shop and have fun again."