It's tough for anyone older than 17 to get excited about the Pokemon craze. Of course, I'm sure you know of a few guys around 30 that are fanatics, too. At any rate, those of you who have dismissed the Pokemon video games because of the "cutesy" factor have missed some entertaining renditions on the Game Boy Advance in Pokemon Ruby and Pokemon Sapphire. Now that the Gamecube gets some Poke-love, how does it match up? 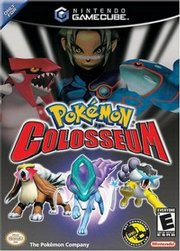 For those who haven't played, the Pokemon games play like a turn-based RPG. You collect different sizes and shapes of these weird creatures and send them to battle, two versus two at a time. These battles' outcomes are decided on how well you know the strengths of your creatures and how you play them. At its heart, it's one big game of rock, paper, scissors.

Like the Nintendo 64 Pokemon Stadium, you can import your various Pokemon from your Game Boy Advance versions and play them here in Pokemon Colosseum. In fact, much of the fun is Fattening up your arsenal in Pokemon Ruby or Sapphire and bringing them to the brutal fold in Colosseum. Fortunately, if you aren't hip to the GBA versions, you can still catch and play over 200 different Pokemon found in the Gamecube version. Nintendo learned its lesson from Pokemon Stadium, which required the use of your Game Boy games.

The amount of strategy and difficulty works well in the Gamecube version. The amount of attacks and strategies are seemingly endless and the difficulty ranges appropriately from simple to complex. There are also Shadow Pokemon that you can collect from another team by attacking and collecting them. When attacking, you gradually (or quickly sometimes) "soften their heart." When they are softened, you can catch them instead of using an attack. You can keep and develop these Pokemon into true Pokemon to use them in tournament battles.

The game's weakness is in its over-exploitation of its strength. The battles are robust and deep, but the mini-games and side quests the GBA versions are known for get left behind in favor of the pure concentration on battling. No matter which mode you choose, the game is one big presentation for battles. There is no real exploration to be done. Still, the battle set-up and execution can stand alone fairly well.

The graphics are bright and fun. There are hundreds of Pokemon models that animate with a cartoonish fluidity. The worlds and architecture are modeled well and display some nice imagination. This is juxtaposed with some poor textures and dumb human models that are a bit too angular.

The music arrangements are top notch, adding the right pinch of intensity and color to battles. Unfortunately the sound effects are highly compressed and sound nowhere near the quality of a next-generation title.

I am not a Pokemon fan. When it comes to card trading/playing/battling games, I am of the "Gimme a break" variety. That being said, I had a lot of fun in Pokemon Colosseum. Despite its shortcomings, it has quite a bit to offer the Poke-faithful and the Poke-critic alike.