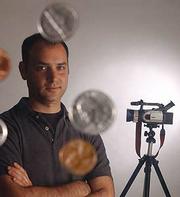 Aaron Martin, Lawrence, is launching a pay website where patrons can download his personal comedy films. From 15 cents to $2, Martin's short films can be purchased from cheapfilms.net

This time next week the Lawrence-based movie and distribution company will launch its site, cheapfilms.net. The online enterprise will feature original comedic shorts that can be purchased and downloaded on one's home computer.

"I've been trying to find other companies that do this and I can't. It's a unique concept," says founder Aaron Martin, a Kansas University graduate student in film.

He came up with the idea in 1996 when stumbling upon an Internet show called GeoSync -- one of the first downloadable series.

"When I saw that, I knew that was the type of company I wanted to have," he says. "I haven't been able to put all the technology together until now."

Martin has become a one-man band in this operation, because he also writes and directs all the videos. Three movies will be available when the site launches on April 15.

"The first is called 'The Instructional Guide to White People,' which is a fake documentary -- like the kind they used to do at Centron -- about the different types of white people," he describes. "There's another one called 'Why Won't They Let Helen Keller Drive a Train?' in which a political action committee runs Helen Keller for office. Then there's 'Pontius Pilates,' about a new workout technique that satirizes the commercialization of religion."

All the pieces are shot on digital video and run less than five minutes. Every two weeks the site will provide a fresh catalog. (Eventually, Cheapfilms plans to post submissions from other filmmakers as well.)

Downloading these shorts costs from 15 cents to $2 each. Financially, Martin is utilizing a company called Peppercoin that specializes in micro-payments. Viewers who wish to access Cheapfilms must sign up for a Peppercoin account, which allows them to buy things from any site that is affiliated with the company. In the case of Cheapfilms, once the flick is downloaded then the fee is charged directly to the consumer's credit card.

"Anything with profane language or nudity, they're going to charge me an extra royalty on the site," Martin reveals. "They're trying to keep pornographers from using the system, basically. A micro-payment system is a perfect site for that: It's private and you're charged per use. What makes it good for me is what makes it awfully good for pornographers."

While that means Martin is held to some Jack Valenti-style standards, it doesn't mean his material will be G-rated.

He says, "It will be clean in language and visuals, but as far as ideas -- let's face it, 'Pontius Pilates' is a little bit outside the box."

A native of Ohio, Martin worked at a Toledo television station for six years upon graduating from Ohio University with a degree in film production. After gaining some practical experience through a variety of different positions at the station, he decided to pursue his master's in film, which brought him to KU.

"I had never seen Lawrence until I drove here to move in to my place two years ago," he says. "But it was the only program I could find that would let you make films, watch them AND study them."

Martin says he is impressed with KU's master's program (he is planning to graduate at the end of the semester), and points to the real-world experience of instructors such as Kevin Willmott and Matt Jacobson as being particularly influential.