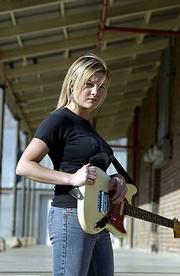 Ashley Ray is finally learning to embrace her twang.

"I've heard that I have this twang in my voice," says the Lawrence native. "My roommates give me a lot of crap because I can't really sing without it. It's just my style."

So far that twang is serving her well.

Ray is starting to find her niche in the country music world. Two years ago, the Lawrence High School graduate moved to Nashville to get serious about developing her songwriting craft. Already her musical abilities are starting to turn some heads.

In 2003, Ray was named "Champion Singer" in a nationwide 14-week competition sponsored by Coors Light. She was also a state finalist in the 2003 True Value Country Showdown. And her original song "John Deere Queen" was featured on the national John Deere compilation album.

The performer will make her first return home as a professional when her band opens for Texas songwriter Cory Morrow on Wednesday at Abe & Jake's Landing, 8 E. Sixth St.

"Usually new artists can be compared to old ones, but I've never gotten that," she says. "I haven't been told that I sound like anyone. I guess I'm pretty unique."

Ray didn't just blindly hurl herself into Nashville's cutthroat scene. She's also taking a practical approach by working on her undergraduate degree in music business at Belmont University. If the Belmont name sounds familiar, that's because it was the little school that humbled the Missouri Tigers basketball team 71-67 in December. But it's also a college well-known for producing such country music stars as Trisha Yearwood, Brad Paisley and Lee Ann Womack.

"I've learned so much here," she says. "In terms of career things, it's probably that the people who stick with it and never give up (will find success). The competition down here is intimidating at times, but it makes you work harder."

Raised on a small farm just outside of Lawrence, Ray was in fifth grade when her mother gave her an acoustic guitar purchased from a pawn shop. The first song she worked up was Patty Loveless' "You Don't Even Know Who I Am."

"When she started, and for the first two years, she just seemed to want to learn her favorite songs from the radio," says Thom Alexander, founder of the Americana Music Academy and Ray's first guitar teacher.

"Then one day when she was about 13, she shows up with a song that she wrote, 'True Love Waits.' She asked if she could play it for me. Being the kind individual that I am, I thought I'd humor her ... wrong. She had this great, well-arranged tune that was emotionally way beyond her years. But the BEST part was her singing. I don't know where she developed her voice but she could really belt."

(Alexander will actually join Ray on guitar for her show at Abe & Jake's. Other locals acting as her sidemen include Dixie Road drummer Dusty Workman and bassist Michael Paull.)

From the outset it was clear that Ray approached her blossoming career as more than just a hobby.

"I had three jobs when I was 15 or 16; I worked at Baskin-Robbins, Sears and a hair salon downtown," she recalls. "I played a show in Wellsville and wasn't pleased with my performance. I realized that the jobs were taking away from my music and I couldn't believe that I let that happen. So the next day I quit all three jobs."

Now at age 20, Ray is concentrating on juggling her school schedule with her artistic endeavors. In hopes of becoming further connected to the music biz, she will also start an internship this summer at Vivaton! Records. The independent label is run by veteran musician Jeff Huskins, who's played with Clint Black and Little Texas.

Don't look for Ray to be taking part in any more vocal competitions, though.

"I've kind of grown out of the contests," she says. "I don't really want to do those anymore. Nobody is going to look at the bio and say, 'Wow, Coors Light named her Champion Singer. We've got to sign her.'"

She adds, "Right now my main focus is writing and honing my skills. I'm not necessarily out there looking for a record contract. If the right one came along I wouldn't turn it down. But I'm just making music. That's all I want to be doing."

Hi Ashley....Great info on you! You were awesome when you entered my contest! I am about ready to launch my next contest by Stardust Karaoke sponsored by DeBauge Brothers aka Coors Light. I hope I have as many well versed singers enter my contest as we did when you took first place! I always wish you the best....and one day...I hope to see you on stage...remember you promised a duet with me one day!
Love ya, Joy Morgan