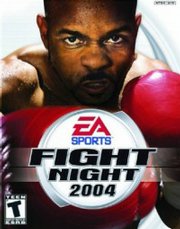 Outside of the Gamecube, console owners haven't seen an EA boxing game since Knockout Kings 2002. The lesser of the EA franchises took a short vacation in the midst of declining interest and a progressively tired formula. EA attempts to return with an innovative control scheme and refreshing presentation in Fight Night.

You have a nice handful of options here in traditional EA fashion. You can rise through the ranks to become the title winner in career mode. You can design your fighter to look like you in the character creation mode. Like in Tiger woods, you can manipulate jaw lines, and the basic structures of your ears, nose, cheek bones, eyebrows, mass, etc. To top it all off, many legends, past and present are available to use as well, like Muhammad Ali, Joe Frazier, Lennox Lewis and Roy Jones Jr.

The most highly touted addition is the "Total Punch Control" with the right analog stick. Your jab, hooks and uppercuts are all controlled with specific motions on the stick, freeing up the buttons for a super punch, taunt and illegal shot. Also new is the bob and weave. When you hold down a trigger and move the right stick, you can manually dodge all punches once you get good.

And it will take a few fights to get used to the control. Sure, you can change the entire scheme to make the buttons execute normal punches, but learning to tame the right analog stick proves rewarding, even though it's particularly stiff at first. One major advantage, besides having one stick for all punches, is that you can pull ay punch if you decide not to throw it at the last second. The buttons won't supply that luxury. Having this option along with the intuitive bob and weave make strategizing a must and deepen the fight immensely. You almost have total control over your fighter. Unfortunately, you can't clench the other fighter to gain stamina back. It makes no sense to not have the option in this attempt at boxing realism, even if it makes the bouts seem "slower."

Another aspect of realism is the level of facial distortion you can bludgeon upon your opponent's head. The first many punches show no real sign of sweat. But as the match intensifies, the boxers perspire, and sweat starts to spray off on connected hooks and jabs. If you are just getting pummeled, that sweat will turn red, your eyes will puff, and that blood will drip. EA did a great job varying the levels of facial damage. I tried to count how many levels there were, but pleasantly lost count in the variation.

Also, there are no set animations when you knock an opponent down. EA employed a rag-doll physics effect for knockdowns. The body will flail and crumble accordingly depending on the speed, force and location of the killer punch. It sends the satisfaction of a knockdown through the roof, even if the bodies look a little to loose. There are a few collision detection problems when the face it supposed to hit the mat or ropes, but overall it's a great effect.

The AI could use quite a bit of tweaking. Outside of the big ticket names, the other boxers have one strategy. Once you learn it, they don't improve or improvise. This makes many of your early career fights rather lame. Once you complete a career, you have to start over with all of the equipment you earned. Yuk. Talk about a replay value downer.

Unfortunately, the hip-hopster and MTV-famed Big Tigger gets the nod to be the announcer for the fighters. Not only is he completely out of place in a realistic boxing title, but his repeated phrases will annoy you quickly. The only place he really fits in with is the soundtrack, featuring a couple P-Diddy tunes among other offerings from Lil Scrappy, Cee Lo and others. Actually, the amount of songs isn't as robust as most in the EA Sports world.

The graphics on both PS2 and Xbox versions sports quite a few jagged edges, but the character models are designed well. There is a musty look to it all, possibly in an attempt to replicate a real life look versus unnatural eye-candy. The animations are well done and the arena models look like they should. Nothing in the visual presentation necessarily wows, though.

The PS2 has an online advantage over the Xbox. You can move up the ranks versus thousands of other PS2 hopefuls, extending the fairly anemic replay value in a single player campaign. If you own an Xbox, it's still fun to play at home with friends.

In the end, Fight Night is a great start to refresh the genre. The new Total Punch Control system has room to improve, the career mode can be tweaked to be deeper and more rewarding and the presentation can be improved by maintaining the simulation-like focus. But what's here is a much needed addition to EA's library and satisfies on many crucial levels.