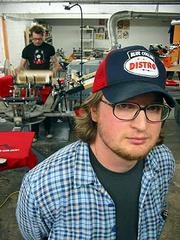 Like the time he agreed to print t-shirts for a friend that read "I'm all gay about Hobbits and shit" (translation: "I like 'The Lord of the Rings'"). Or the time he printed a line of unicorn-clad "Emo Cutie" trucker hats (in hot pink and pastel blue).

"We thought it was the dumbest hat you could possibly get -- I mean, it looks hideous," Ingram said. "But people bought it."

As the owner of Blue Collar Press and Distro, Ingram has learned that bad ideas are often the best ideas -- so long as you have customers with a sense of humor. Among the company's goodies: a Reggie and the Full Effect trucker hat that reads "Keyboards 'R for Pussies"; a line of Get Up Kids "band camp" shirts that proclaim the wearer an "Official Camper 1997"; or the ever-popular "Rock Out With Your Cock Out" trucker hat (currently out-of-stock).

Ingram's sense of humor is more than a novelty; it's smart business. Every "Emo Cutie" hat that he sells equals another day he doesn't have to sell his soul.

"When we went into this business, we didn't want to do church jobs, soccer shirts or anything like that," he said. "It's not really what I would consider grueling work. It's hard and it's long, but it's something fun at the same time, whereas you have 500 volleyball shirts that need to be done tomorrow -- that's work." 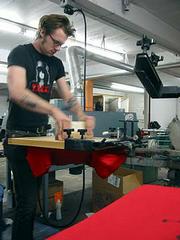 Punk rock press
On any given day, Ingram and his team of screen printers, graphic designers, button assemblers, shirt sorters and patch makers are hard at work churning out merchandise for some of the biggest new bands in the music biz. Among the company's clients: Dashboard Confessional, Rooney, Motion City Soundtrack, Lucky Boys Confusion, Something Corporate and The Von Bondies.

The company's biggest boosters, however, can often be found hanging out at its headquarters on Eudora's Main Street. Get Up Kids Matt Pryor, Ryan Pope and Rob Pope bought into the company two years ago, seeking a local avenue for printing and selling their band's merchandise.

"We were tired of having to deal with merchandising companies ... something always went wrong," Rob Pope said. "It seemed a lot easier for us to keep it in-house."

The Get Up Kids' support helped Ingram and his former partner Andy Fisher move out of Fisher's basement and into the company's current two-level warehouse space. The company -- then known as The Bear Press -- became "Blue Collar Press" when Ingram and Fisher parted ways a year ago.

By then, Ingram had already established a long list of clients based on the contacts he made while touring with hardcore band Coalesce (where he earned the name "The Bear" for his grizzly metal voice).

"I think Coalesce has a certain amount of street cred," Ingram said. "We always did everything ourselves and (bands) realize that." 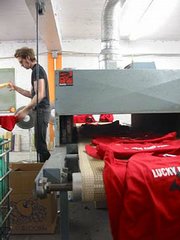 When word started getting around about a cheap local t-shirt maker in town, local bands like The Appleseed Cast, Ultimate Fakebook, The Casket Lottery and rapper Mac Lethal also began putting in orders.

Ingram said the company's cheap rates made it attractive to local bands (t-shirts cost between $4.00 and $6.50 apiece depending on how many colors are needed).

"I never liked paying seven, eight dollars for a t-shirt to resell for ten," he said. "T-shirts are almost a liability when you go on tour like that."

Merch monkeys
Blue Collar's four full-time and two part-time employees split duties in the basement of the company's warehouse, where an oven bakes freshly printed shirts at 350 degrees and a high-tech button cruncher helps the tattooed work force churn out 40,000-pin orders for major-label bands like Cave In.

"It gets boring after awhile ... but you get paid per piece, so you definitely have to concentrate and be like, 'Keep moving, keep moving,'" said button maker James Wesley, as he painstakingly put pin backs into a 2,000-pin order. "I'm one of those guys that has to constantly be working or I go nuts."

Despite the occasional monotony of the job, Wesley said he was thrilled to be doing work for bands that he loved.

Burton Parker in the stock room.

Screen printer Cooper Moon, also a bassist for local rockers Filthy Jim, said he enjoyed the fact that his boss was actually present and involved in the everyday happenings of the company.

"We're all just punk rock kids that work for a punk rock company," Moon said. "I grew up around that kind of aesthetic and I love that that's involved in this job."

The company's productivity is respected by clients like Doug Lefrak, who manages Motion City Soundtrack and Lucky Boys Confusion.

"They're the greatest thing since sliced bread when it comes to band merchandise," Lefrak said. "They know what bands need and how quickly they need things ... Sean keeps an ear to the ground to see what the kids are wearing and what they're not wearing."

A company transforming
Though Blue Collar's goods are mostly sold by bands on tour, the company's website (bluecollarpress.net) offers fans another avenue to buy their favorite band's gear. Members regularly post suggestions on the website's message board, which doubles as a forum to talk about Blue Collar-related bands.

"We actually take their suggestions and make stuff based on what people post on the boards," Ingram said.

Though the company doesn't sell directly to stores, its clients sometimes sell leftover merchandise to retailers. 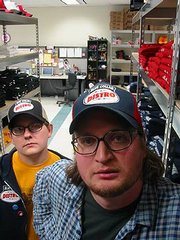 "I'm sure that a lot of our stuff that we make for bands is in Hot Topic," Ingram said. "It's a trip to go to the mall with my family and see kids wearing our stuff."

Blue Collar has also begun to offer graphic and web design services courtesy of Burton Parker, who joined the company last June. Parker designed the artwork for the upcoming Reggie and the Full Effect album "The Lord of the Bling" and has also designed websites for The Get Up Kids, Hey Mercedes, The New Amsterdams and Black Lodge Recording.

"We've definitely starting to get recognized for all facets of design," Parker said. "I seem to be new doing new websites every month, to the point where it's almost hard to keep up."

The company's most unusual venture may be its foray into toys, which in the past year has included web-store offers for Optimus Prime Transformers, Marvel "MiniMates" and punk rock action figures.

Ingram, who proudly displays his immense Transformers collection in his office (many acquired in exchange for rare Coalesce vinyl), said the toy store was more for fun than profit.

"As much as we work we need to have to some stupid habit," he said. "Transformers are safer than most I guess."