Finnessey, Miss Metro St. Louis, is pursuing a graduate degree in counseling at Lindenwood University in St. Louis. She was crowned during the Miss USA ceremonies at the Kodak Theatre in Los Angeles.

The finalists competed in swimsuit, evening gown and interview competitions.

The winner's prize package includes a New York City apartment for a year, extensive travel opportunities and a yearlong salary.

Finnessey will represent the United States at the June 1 Miss Universe pageant in Quito, Ecuador.

Finnessey had said during the state competition that her platform is integrating people with mental challenges into society. 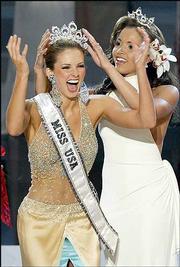