The art of noise 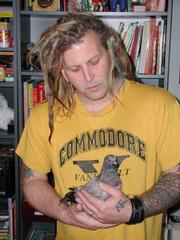 The music business is a sham. We all know that. Okay, the people that listen to Kenny Chesney and Aerosmith don't know it, but the rest of us do. With the exception of the insurance industry, the pharmaceutical industry, and catholicism, it may be the most corrupt business in the world. The creative process of major label music involves people in shiny suits making decisions like, "Hey, God is big this year. Bring me that ugly kid that sounds like Eddie Vedder," and, after pulling a slip of paper from a hat, "This year's pop will be called 'Garage!'"

And it may come as a surprise to the average Godsmack fan that radio is controlled by big record companies. Perhaps you've heard rumors to that effect. Of course there are exceptions, but independent radio frequently involves computer noises produced by people wearing "Quisp" T-shirts. Hey, at least they ain't Nickelback.

Brad Logan wants to save you from further atrocity. Since 2001, Brad has been the owner, CEO, CFO, boss, big cheese, and primary shareholder of Blacknoise Records, an independent label based in Lawrence. And while the music he puts out isn't for everyone, it does have something that most major label music lacks: integrity. Oh, and millions and millions of dollars.

While working for various east and west coast labels for the better part of a decade, Brad grew progressively more disillusioned. He got tired of trying to talk the labels into signing bands that he thought were amazing while he watched them sign band after band that he felt didn't have anything to offer. One day while having coffee with a friend who had been a member of the New York anarchist punk band Nausea, he was lamenting the lack of label interest that the band had generated before their breakup in 1992. Nausea had been a political, metal- and punk-influenced band in the late '80s, when those styles weren't in vogue, and because of this they were relatively unknown despite their short but influential career. Brad contacted all the members with the germ of an idea, and thus, with "Nausea: The Punk Terrorist Anthology Vol. 1," was Blacknoise born.

"If there's a direction for the label, it's just very underground, aggressive, usually political - but not necessarily - uncommercial music. That anti-mainstream type of stuff which I just love. I love things that are different, things that go against accepted styles of popular music," says Brad.

Since the dawn of Blacknoise, Brad has only pursued bands that he's been genuinely excited about. This is a labor of love, and he harbors no illusion that he'll become an overnight mogul.

"I've been financing it out of my own pocket. So if I can get it to a point where it breaks even and it pays for itself, that would be amazing," he said. "My prime motivation is to put out records by great bands. Nothing does it for me like that. Seeing a great band, like the Esoteric ... I was just completely overcome. And I love that feeling. It's like a drug. I don't drink, I don't smoke, I don't do drugs. Music is it for me. I love that feeling."

Brad's love of music has brought him not only his latest artist (the Esoteric's "1336" EP is due out May 11), but also the love of his life, in the form of painter/printmaker Kristin Ferrell. Brad met his wife while touring as a guitar tech for Pete Yorn. After living on the west coast for a while, the couple decided to return to the bucolic landscape of Lawrence.

"It's pretty cool out here. It sneaks up on you," he said. "You get here and it's like the best kept secret of middle America. It's like this small Mayberry RFD town that has all the components of New York, LA, Seattle, Chicago, London. Really. ... Thriving arts and music communities, and just very free-thinking community. ... It's all totally underground. You drive through town and you can't tell. ... But you hang out for a little bit, and it's under the surface." 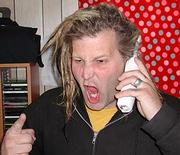 And the underground is where Brad likes it. Where else could he do his job in the comfort he's grown so used to.

But a label like Blacknoise is constantly under threat, naked work environment-related and otherwise. Without the obscene budgets of the major labels, small labels will always struggle against the bottom line.

"I'm still in the stage of trying to figure that out. For me, I think that as long as I don't try and rely on this as a means of support and continue to look at it as a hobby, and put the music first and the bands first, that will be a success," says Brad.

"The community at large is definitely a better place with these artists in it, and the things that they have to say, and the ways that they present their ideas," Brad says.

Sure, you could say that about Aerosmith, too. But you'd be wrong.