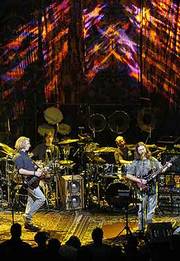 lawrence.com :: Why do you do this? What's the lingering appeal of the Grateful Dead? What's worth preserving?

Rob Koritz :: To the guys in the band? Every one of us was a huge fan of the Dead, and we're all dyed -in-the-wool Deadheads from back, you know - some of the older guys, as far back as the early '70s. Some of us younger guys, not til the mid to late '80s. What's the appeal to us? A, we love this music. If we weren't in this band we'd be going to see a band that was doing this type of thing. And B it is the music. It's phenomenal; it's different every night, it's always changing. Even for us, reproducing it, because when it comes down to the improvisation, that's all us. So for us, we get to improvise every night. It's different for us every night just like, in a sense, the way it was for them. Granted, we have some borders we have to stay within depending on what period of the Grateful Dead we're doing. But it's open for us every night to go ahead and improvise and still be able to express ourselves creatively. It's not just regurgitating Grateful Dead songs for us; it's definitely a creative outlet.

And is the whole Dead vibe play a part?

The vibe's part of it - there's so much of it that's worth preserving. Sure, the vibe, and what goes on outside the venue, and what goes on inside the venue that doesn't have to do with what's going on on the stage. Sure, it's cool to be able to give the people that again and preserve it; for them to be able to come out and hear the music the way it was originally played. If you paralleled it to a jazz group, we play it from a purist standpoint. Trying to be as true to the original form as we can. There's Grateful Dead cover bands. They're a dime a dozen around the country. Every town you go to you'll find at least one, and a lot of times you'll find more than one. And that's great too, 'cause they're puttin' their spin on it. But we do it in a different way; we try and keep it as true to the form as we absolutely can.

How far do you take the illusion?

Are you covering any of the Dead side projects?

We did some Jerry band stuff a while back. Right now, actually, our guy who does Jerry Garcia parts is on the road with a band called The Mix, and it's Melvin Seals', the organ player for the Jerry Garcia Band. And John and our bass player Kevin and a west coast drummer named Greg Anton who used to play with a band called Zero, and was the original drummer in the Heart of Gold Band, which was Donna Godchaux's side project from the Dead - Donna and Keith's, both, side project. He's out doing some of that stuff, but as Dark Star Orchestra do we do any of that? We did some Jerry Band tours a while back, a couple years ago, but no. Some guys tackle some of that stuff on the side. Some of us tackle other things on the side.

You've got no Keith Godchaux character in your band.

That would be bad.

Leave nothin' but a globule sittin' there.

Are you guys doing theatre? Tribute? A cover band?

Is it a tribute band? Yes. Is it a cover band? Yes. Is it theatre? Yes. Do we look at it as performance art? Yes, because we're creating every night. When people come to it not knowing what to expect, they're gonna get - hopefully, if we're doing our jobs with the right passion and it's comin' out that way - they're gonna get the feel, and the sounds, that they might have gotten on that particular night in Grateful Dead history.

You're recreating historical Dead set lists. How faithful are you; how much do you deviate from the original?

What we're taking from them is obviously the set list. And then, for whatever year that set list is from, we're taking arrangements and tempos and tones and stage setups and sounds that we would use and playing styles, and bringing that all into the mix. But then when we get it all up to the stage we're not doing anything note for note. You can make the verses sound exactly note for note, possibly, like it did that night. Possibly. Probably not. But when it gets into the jams, and getting the jam within a song, and even more so getting from one song to another, there's no way to recreate that vibe and feel without having some artistic - without having total artistic expression of your own. You can't do it note for note, and it won't come out sounding creative if it's not. You know what I mean? When they did it they had to be able to have creative freedom and the creativity to pull it off. To make it work, to get from one song to another song that might be in different keys and different time signatures and what not. But there's no way for us to do that note for note. We're students of their music, and we use our creativity to make it happen.

Do you know which show you'll be doing in Lawrence?

Actually, I just found out today. I can't tell ya. Let me go look and see what it is.

If someone really wanted to hear, for instance, the October '77 show at Memorial Hall, would you oblige?

It comes down to a couple things. If they request it, we might. What dictates what we're gonna play? A, have we played it before? We tried not to repeat, although we are repeating the late '70s now just because we've played 'em all. Then it comes down to other things. How big is the stage? What did we do here last time? And if we did a '77 show last time we were there, chances are we won't do one again. Y'know, we'll take you for a different ride, give you a different flavor.

Which era do you cover primarily, or do you plan on covering all of them?

Right now we don't do anything that involved Pigpen, unfortunately, just because we don't have a Pigpen persona - someone who can do the job for us. But up to this point we've explored everything prior to that, which is late '71, early '72, all the way up through - we've done all the way to '95. We don't do a whole lot of '90s shows for various reasons.

Do you do any original material at all?

To shake it up. It's kinda fun. There's both schools on it from our fans. People that really dislike it, people that really enjoy it. When you can take a Brent tune and a Donna tune and sandwich 'em together and things like that, y'know, and take tunes - y'know, there's some great tunes that they might have only played five or six times, and we wanna play 'em more than that, so we'll do an original set list where we can throw in all these tunes that they hardly ever played.

And it's not like the Dead weren't mixing old and new material.

Sure. Sometimes, like I said, some fans don't dig it a whole lot when they come out. They expect to see a show and they don't dig when we do that. A lot of other fans think some of our best shows are the ones that we make up a set list ourselves.

Do you have tapers at your shows?

Yeah, on occasion. Yeah, we do.

The first official Dark Star Orchestra release has been out for a while. Thunder and Lightnin', a live record. Is that a historical set list?

No, it's an original set list, it's from a historical place. It was recorded - now it's been a year and a half, I guess - we recorded it - it's only been out about a year, probably, maybe nine months, but, uh, actually not even that long. We recorded it at the Oregon Country Fair, which is the fairgrounds where - in Veneta, OR - where the 8/27/72, some peoples' all-time best Dead show was played. And we played at the Oregon Country Fair. We played in the afternoon, and Bill Kreutzmann sat in with us, and we had a great time and everything was really cool, and Betty Cantor was recording. And then, after the fairgrounds closed, just the employees were left, which was a few thousand people. We played a second set after dark. This is that second set.

Will there be a "Betty's Picks" series of records?

I don't know about that, but she's recorded us quite a few times now. Most recently we just did a Rex Foundation Benefit March 6 in Chicago, and Betty recorded that. And it's actually gonna be coming out in DVD format - it was videotaped also. So that's gonna be coming out in DVD format probably in the next couple months, with the proceeds going to the Rex Foundation.

What are the parking lots like at the venues you play?

Y'know, it happens. It's a little more vibrant in the summer obviously. I don't go out there too much. Sometimes there's nothin' goin' on, absolutely nothin'. Other nights is looks like "Honey, I Shrunk the Tour." Other nights it's out there. Vending and whatever. I stay out of there pretty much.

Well lawrence.com is bringing enough nitrous for everyone.

Yeah, that's why I stay outta there. Scranton, PA. We just played there, and it's like a gross, gross gas party every time we're there.

Yeah, of all places.

I've never been there.

You're not missing anything.

Any thoughts on the greed that overtook the Grateful Dead organization? Like when they fought the luthier that made Jerry's guitars over some guitars that Jerry willed to him?

I'm not gonna comment on any of that on the record. Just because it's not our place to talk about that. We can't do that. I wish everybody got along. Right now it seems like everybody is, 'cause they're back on the road together, with all of them, all the remainders, for the first time in a lotta years. So whatever differences they had, it looks like they've patched them up, and I'm really happy about that.