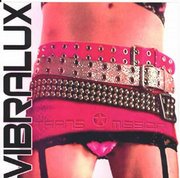 Though it's undeniable Vibralux puts a lot of heart and dedication into its stage show (hours of prep time preclude the band's performances), the music sometimes seems like an afterthought. Clearly, Vibralux aimed to change that by releasing this 17-song album. However, "Trans-Mission" does more to confirm that the band is still a heck of a lot more interesting on the stage.

If it's true that nothing's shocking anymore, glam bands also have to charm with an equal amount of talent. While lead singer and guitarist Mercury can wank and wail with the best of 'em, the rhythm section's just not up to speed. Part of this is due to the absence of a real bass (the band relies on a strap-on synth), but most of it is the haphazard drumming (competent but less-than-thrilling).

Another weak point is the production: the drums sound thin and cheap; the synth bass gets lost in the mix; and the guitars reek of overused Marshall Stack sounds. Rather than unleash this 17-song beast of a record, maybe Vibralux should have focused on recording a smaller amount of songs better. It's hard to buy into glam rock when the snare drum sounds like it has a piece of cardboard on top.

A redeeming aspect of the record is Mercury's hellish set of pipes, which, given the right context, could certainly flourish in a glam rock setting. The band is at its best on songs like "Single," which sounds positively uplifting from the opening verse: "Kick off your night with a smile now honey / Don't let no one tell you that you're wrong."

That sort of spirit comes across as much more genuine than songs like the trite "Fashionista" ("I'm a white-belt wanna-be fashionista queen of the scene.") Tales about "Space Fags" and "Transvestite Boyfriend" can titillate and shock, but lack the emotional content of standard-setting glam bands like The Darkness or T-Rex.

Maybe Vibralux would be better suited for a Broadway stage than a Bottleneck stage. Unfortunately, Hedwig and the Angry Inch got that gig first. That leaves Vibralux in a difficult position -- trying to distinguish themselves in a genre that just begs comparison to those who did it better already: David Bowie, The Darkness and Hedwig included.

Vibralux does have panache -- you can't fault them for being dull. Hopefully the band can take that passion and tone it into a more polished, cohesive musical vision.