Lawrence's Minus Story finds gold behind 'wall of crap' 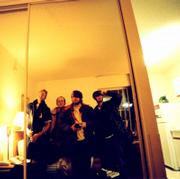 A few years ago Jordan Geiger had a friend who made a short film about an author wrestling with writer's block. The plot hinged on the man questioning why there has to be a "story" within a piece of writing.

"So we started making fun of it -- even though it was actually really good -- by calling it 'minus story,'" says Geiger. "For a short period of time we would rate various things by how much they were minus story or not. For instance, 'Mulholland Drive' -- that movie is minus story. Whereas (Arnold Schwarzenegger's) 'Twins' is not.

While Geiger can name a number of different artistic endeavors that fit and don't fit the definition, he emphasizes, "Minus Story the band is DEFINITELY minus story."

One listen to the act's new nationally released record will verify that Minus Story lives up to its name.

The Lawrence-based outfit -- keyboardist/guitarist Geiger, guitarist Andy Byers, bassist Brian Phillips, drummers Nick Christus and Tyler French -- will throw a CD release party tonight at The Jackpot Saloon (943 Mass.). The group is planning to perform every cut from its unorthodox album "The Captain is Dead, Let the Drum Corpse Dance," along with a few new songs and a cover of "Hybrid Moments" by Misfits.

Aside from that, it should be a pretty no-frills show.

"The quality of the performance live is much more powerful than the record," Geiger stresses. "If (audiences) want to see a bunch of kids with cool haircuts jump around then they can go to any other number of shows that come through here."

Phillips adds, "It's not like we're committed to NOT moving on stage. It's just something that happens."

Part of the reason is that Minus Story is the rare group where more of its members sit down than stand.

"Or Flock of Seagulls," Phillips chimes in.

Then there's the fact that Minus Story is one of the few non-hippie jam bands that believe having two drummers is a good idea -- both musicians seated and playing full kit, no less.

The reason for this dual attack didn't have so much to do with the original sonic vision of the group but rather out of friendship and necessity. While Christus is the sole drummer on the album, the Boonville, Mo., resident wasn't always available to make it to every live show (complicated by the fact that he recently became a father.) Occasionally, indie-rock journeyman French would fill in at a gig.

"At some point they could both play the show," Geiger recalls. "So we were like, 'OK, I guess we'll try two drummers.' It just worked out really well. It's never NOT worked. You would think it would take a lot of practice for them not to overpower each other. But from the first time that we played it worked incredibly well."

Things have always worked out incredibly well for the members of Minus Story.

All four in the recording lineup grew up 135 miles away in Boonville, with Geiger, Phillips and Christus forming cover bands together as early as eighth grade. When they came to Lawrence to dabble in college life (none are currently still enrolled at Kansas University), the loose collective became a unified act. Two self-made albums ("Belle Ame" and " Moebius Syndrome") followed. And then to everyone in Minus Story's surprise, the collaboration led to a national recording deal.

"The record was almost like an art project," says Geiger. "We were planning on sending it out to labels but it's not like, 'This is totally going to get released.'" 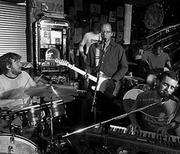 Minus Story originally shipped a CDR of the latest material to 10 different labels. Jagjaguwar Records showed immediate interest. Home to artists such as Oneida and Patrick Phelan, the Bloomington, Ind., label seemed like a good match for the Lawrence act.

The band's Jagjaguwar debut "The Captain is Dead, Let the Drum Corpse Dance" was released April 6.

"The response of the record coming out for us has been incredible," Geiger says. "We've gotten so many more reviews from places all over the world. We got a real cool review from Belgium and there's been some Internet and print magazines from England. I'm doing an interview with somebody from Sweden and an interview with a magazine in Australia. It hasn't even been out a week and there have probably been 10 different reviews and only two are from the U.S. so far."

Phillips says, "Most of the feedback we've EVER gotten is from overseas."

The European connection makes sense when it comes to Minus Story.

Not only does the ensemble's appearance conjure the image of a night spent in a Berlin youth hostel, but its atmospheric music seems to avoid much of the faux-angst trappings that have made American rock music so mundane. Minus Story's bio cites influences from Neutral Milk Hotel and Modest Mouse to The Zombies and Yes. Regardless of the comparisons, the sum of these parts is something wholly unique.

"The Captain is Dead" proves the band is certainly marching to the beat of a different drummer ... or, drummers.

Songs such as "The Happy Activist" and "Joyless, Joyless" (the members' collective favorite) are hummable enough to be considered experimental pop tunes. But there's also an atonal quality that nearly moves them into the realm of performance art.

Particularly notable is Geiger, whose vocals are as ethereal as his keyboard textures. The musician delivers haunting melodies with the type of strained tenor to which Neil Young could relate. It's a voice that is instantly distinguishable from other Lawrence performers.

"One time someone said I sound like Conor Oberst with Down Syndrome," Geiger says. "I find that kind of inappropriate because I don't like (Bright Eyes frontman) Conor Oberst's singing or Down Syndrome."

One other secret weapon the group has discovered is its approach to production. Phil Spector may have popularized the "wall of sound," but Minus Story is perfecting the "wall of crap" sound.

"The definition of the wall of crap sound is that at some point we realized the quality of the signal we were getting wasn't good enough to make your standard rock record," Geiger recalls. "Just because of our lack of knowledge and lack of good equipment, we decided it would be much better to combine a lot more interesting, screwed-up sounds and keep layering them until it resembled something we would be satisfied with."

Could this mindset some day lead Minus Story into the mainstream? Maybe. Because as everyone in the music industry knows, "crap" sells.