What? 2005? Wow, we are seeing into the future of baseball games! Okay, not really. Acclaim is one of those companies that never really caught on to the whole year scheme. You're supposed to have the year signify when the season ends. Whatever. All-Star Baseball has always held its own among the EA and Sega offering. And this year it gets even closer. 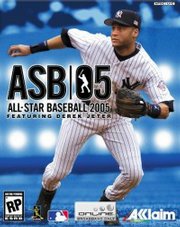 All-Star sets itself apart with one of the deepest franchise modes in a baseball game. There is an endless supply of modifications you can make to manage and MLB team or your own. Not only do you have the normal options of trades, deadlines, scouting farm clubs and normal employee rotations, but you can attend off-season trade events and get into the nitty gritty of the financial aspects of your franchise. Those who are into the simulation side of baseball versus the casual gamers looking to hit a few out of the park and move on to the next game.

Casual gamer, don't fear. All-Star is the easiest baseball game to pick up and play. The batting and pitching interfaces are pretty general and the casual gamer's intuition will have no problem playing the quick play option with an arcade mindset. That being said, hitting the ball is much easier in ASB05 than the other titles. There is strategy to employ how to pull or where to hit, but many times your calculations will be correct.

The pace of the game can't be sped up enough. On its highest pitch speed, it still seems to poke along a bit. This is a major advantage for the offense, obviously. This sort of hitch can really bug the heck out of the baseball connoisseur, and may damage the replay value.

On the flip side, one of the new camera angles can be put behind the pitcher's shoulder. Now every nuance in your curves, breaks and screwballs can be seen and enjoyed to their fullest extents.

Unfortunately, the camera can get in the way of your fielding and there is nothing you can do about it. When a ball is hit out of the infield, the camera auto-switches right behind the outfielder. When the ball is popped up, you won't see the ball, but instead be following the arrows and guides to where the computer says the ball will drop. This takes so much of the strategy out of it, especially when you choose manual fielding.

The animations are fairly standard and pale in comparison to EA and Sega's offerings. The graphics seem a bit dated, but are a major improvement over ASB2004. The presentation is wonderful. Random crowd chants and taunts echo poignantly and the bat cracks are crisp. The commentary is vast from Steve Lyons and Thom Brennaman. There is surprisingly a Spanish commentary from Arizona Diamondbacks announcer Oscar Soria and with closed captioning!

All-Star is a great game overall despite its shortcomings. You can play online or relive and change some of baseballs greatest moments as well. It's a nice package. Some may prefer it over the big wigs' baseball offerings. It does have that potential, indeed. But only playing will tell.