It just might make you cry. Wait...is that a good or bad thing?

The video game world, as we know, is saturated with first-person shooters. Game after game flies by on PCs and consoles only to have it forgotten in a matter of weeks. And while some games add a new feature here and there, it takes meticulous design of the little gameplay elements we take for granted to make a truly stellar shooter. Such is the case in Far Cry. 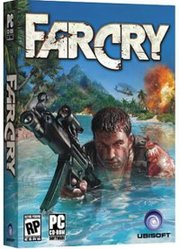 So you are Jack Carver, a troubled drifter who crashes on a tropical island occupied by Dr. Moreau-like scientists and militia. Since you were supposed to be escorting a lady journalist around this Micronesian island, you must find her, wherever she landed. On your journey, you encounter countless human and engineered animals and a mysterious guide you communicate with through a radio you happened upon. Boasting bad voice acting and laughable dialog, Far Cry guides you through an otherwise interesting story with a robust cast of characters.

Developer Crytek built Far Cry's "Cryengine" to accomplish a few purposes. Most notably it was to create incredible real-time draw distances over one kilometer, use java-based programming to decrease the burden on modern video cards and build complex artificial intelligence and physics routines. The result is resoundingly positive, and a heck of a lot of fun.

This isn't a guns-blazing shooter. Crytek made the grass, bushes and other foliage look incredibly real for a reason. The foliage is your friend. Duck or crawl through some tall grass while finding the head of a guard a few hundred feet away. You arm your machine gun and fire in short bursts, taking him out. But now, you've alerted his cronies. Do they just fire away in your direction? Nope. They will search you out. One guy may be a visible decoy while another flanks you unknowingly. If you die and revisit the situation, the reaction will be different. It's a uniquely randomized AI system that never disappoints outdoors. Once you get into the indoor environments and encounter non-human forms, the enemy strategy takes a small dive. There doesn't seem to be as much teamwork involved in flushing you out. Still, it's head and shoulders above other FPS entries.

Crytek wants even the pansies who play the game on easy to understand the brilliance of most of the AI routines. The flanks and teamwork is still there, but once they find you, they are horribly inaccurate. That is a great way to go about difficulty settings.

There are destructible objects, gas cans and some shelters. Unfortunately the hullabaloo about Far Cry applying an extensive geographical modification feature is wrong. Most of the environment is indestructible. It's not so bad considering the scripted destructibles seem natural.

The weapons from M4, sub-machine gun, rocket launcher to sniper rifle are all balanced well and have a distinctive "feel" to them. Most have a second function that is usually a silencer or slower, more accurate rate of fire. But don't worry about conserving your sniper ammo for later. Sniping is so satisfying and you may not get as many chances to use it as you had hoped.

There are no in-level load times. This keeps the pace charging along nicely as you use your environments to hide your path. When you come upon a vehicle, you can choose to use it or go it on foot. There are always two or three obvious paths to your objective, making the wide-openness of Far Cry very pleasing. And considering how maddening the vehicles can be, you may want to run to your destination. WASD drives and turns your vehicle while the mouse button is your look mode. The main problem is, looking around while driving is slow and burdensome. You will be struggling trying to understand your location while running into various objects. It never seems to fit.

I got by most of the game not having to use many vehicles. The satisfaction of combat combined with brilliant outdoor design was enough to give me a highly enjoyable experience.

The graphics are remarkable. The tall grass is so lifelike that it really jumps off the screen. If you lower the graphical settings, you may encounter objects randomly popping up, but otherwise the draw distance in awe-inspiring. Explosions are glorious and particles from broken objects look and shatter with great realism. The human physics are some of the best in the genre without being overdone. The only problem is, you have to get a current generation video card and processor to make it shine.

The surround sound is done well, but the effects tend to drop out a lot when using lower end hardware. Still, the effects are as remarkable as the graphics. I can't say the same for the dialog, especially the overly-repeated phrases that the guards say. Not only are the sayings repeated often, but some are as sophomoric and non-threatening as "I'm gonna shoot you in the face" or the scary "I know you're over there." What is this, hide and seek in kindergarten? Okay, it's not terribly distracting, but falls far from the quality of the entire package.

Get online and play some Deathmatch and capture the flag. That's it. Although the physics dwarf Unreal Tournament 2004 and Battlefield: Vietnam, there just isn't a great feature set to pull in a huge audience. Hopefully the modified maps upcoming will inject some excitement into the multiplayer arena.

Far Cry is excellent. It sets a new standard that shames the rush jobs many others put out. It has some sound and vehicle issues, but nothing entirely maddening. It is truly one of those shooters that has that inexplicable magic that you have no choice but to play.