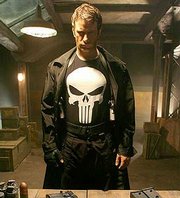 "Don't let your memories kill you."

But this ridiculously inconsistent revenge flick may. Although it is masquerading as a trashy '80s Schwarzenegger action flick, "The Punisher" is actually the newest Marvel comic book character brought to Hollywood's big screen.

"The Punisher" is like Mel Gibson's "Payback," but not nearly as much fun, and without a charismatic movie star. Instead, we get Thomas Jane, who looks blank throughout the entire film, as former undercover cop Frank Castle. We are also treated to John Travolta in yet another gloriously unconvincing evil guy role (see "Battlefield Earth," "Swordfish") as Howard Saint, a cross between Hugh Hefner and his own Tony Manero from "Saturday Night Fever." He spends the movie puffing on cigars, spouting horrible one-liners and sporting extra-large, wide-open collars.

There's nothing to the movie really, so the first 25 minutes are spent setting up his family's inevitable death. And I'm not just talking about Saint's crew running down merely his wife and kid here -- but EVERYONE on BOTH sides of their family gets cut down. I guess it's a good thing they had a family reunion that weekend, so Castle could morph his enormous grief into becoming the ultimate vengeance machine.

When Castle finally got around to delivering some punishment, I had already felt punished by the overbearing, ineffective first third of this movie.

This ridiculously inconsistent Marvel Comics adaptation is awful enough to ask audiences the question: "How much punishment can you take?" Viciously violent one minute and uproariously funny the next, "The Punisher" makes no sense. John Travolta can add yet another gloriously unconvincing villain to his growing resume.

This is the kind of movie where all the bad guys wear black and have large, billowing trench coats. And they are such powerful men that, even though Castle was hidden deep undercover in Puerto Rico, they have no problem tracking him down. But when Castle steals 50 million dollars from Saint, it takes them more than a little while before they find him living in a run-down apartment building in the same city. Why? Simply because it suits the plot not to find him yet.

Bring in a body-pierced loser, a down-on-her-luck hottie, and a portly opera-singing man named Bumpo (who looks oddly similar to Ortho, the goofy psychic from "Beetlejuice"), and get ready for a major tonal shift in the film.

At this point, when Travolta says "Bring in The Russian," I was hoping that Dolph Lundgren (the original "Punisher") would break down the door and enter as Ivan Drago from "Rocky IV" to liven things up a bit. That's not exactly what happened, but the scene that followed was the most fun of the entire film!

"The Punisher" goes slapstick, as The Russian (Kevin Nash) indeed breaks down the door, looking like Hitler's poster-boy for giant, bleach-blonde sailors. What follows is a deliriously funny fight routine filled with toilet-bashing, wall-smashing, and a quick game of "grenade ball." Coupled with the previously inappropriate neighbors' prancing about, the brief blast of intended humor is a welcome relief. This is exemplary physical comedy, and finding it in the middle of such mock seriousness was an odd surprise.

Certainly an entire film of campy revenge tactics and zany madcap laughs would piss off hardcore fans of the comic, but it would have made "The Punisher" a whole helluva lot more enjoyable to sit through.

"The Punisher" just isn't for everybody. Travolta sums it up best with one of his many psuedo-clever lines: "If you don't like it, just remember one thing: I've got more guns than you."