The characters of Tennessee Williams are among the most famous in the American theater. Flesh-and-blood beings brimming with love, lust, longing, mendacity, steely determination and, most of all, a poetry that only a genius could create.

No wonder the Kennedy Center for the Performing Arts in Washington, D.C., is spending much of this summer celebrating the man who wrote "A Streetcar Named Desire," "Cat on a Hot Tin Roof" and "The Glass Menagerie" in a $5 million festival called "Tennessee Williams Explored."

But with familiarity comes preconceptions.

"I think we have these characters attached to mythical performances," Michael Kaiser, Kennedy Center president, says. "We see Elizabeth Taylor in her slip. We hear Marlon Brando yelling, 'Stella!' Every ninth-grade teacher taught us about Amanda and the imagery of 'Glass Menagerie.' We have these images in our heads, and I think they somehow obscure the real poetry of the plays.

"I felt it was time to do them again, to try and not mimic the iconic performances -- just to cast them well, hire strong directors and let the works speak for themselves. I'm hoping that's what happens."

And as the centerpiece of the festival, Kaiser and company have chosen the three best-known Williams plays: "A Streetcar Named Desire," which will play the Center's Eisenhower Theater May 8-May 30, followed by "Cat on a Hot Tin Roof" on June 12-July 4 and "The Glass Menagerie," July 17-Aug. 8.

Two summers ago, the Center became a must-visit destination for musical-theater buffs because of its salute to Stephen Sondheim and the possibility of seeing six full productions of the composer's shows, ranging from "Sweeney Todd" to "Merrily We Roll Along."

"The idea of the Sondheim celebration was to show the works next to each other," Kaiser said. "There was a myth that all Sondheim shows are alike -- they're not."

That side-by-side comparison is not what the festival is attempting with Williams.

"We are trying to do wonderful productions and have the audience come away with a new appreciation for the quality of these plays and maybe not just think about Marlon Brando, for example, when they think about 'Streetcar Named Desire,"' Kaiser says. 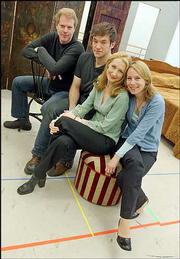 Actors, from left, Noah Emmerich, Adam Rothenberg, Patricia Clarkson and Amy Ryan, are cast members for the Kennedy Center for the Performing Arts revival of Tennessee Williams' "A Streetcar Named Desire." The play runs May 8-30 at the center in Washington, D.C.

It's difficult not to, according to Adam Rothenberg, who has the unenviable task of playing the brutish Stanley in Washington.

"It's been a long time since I've seen the movie (which starred Brando and Vivien Leigh), but it's always in the back of your head," Rothenberg acknowledges. "I plan to approach the role as fresh as I can." Rothenberg was last seen off-Broadway in an adaptation of William Wharton's novel, "Birdy."

The Kennedy Center's "Streetcar" will star Patricia Clarkson as the ethereal, genteel Blanche. Clarkson is best known on stage for her roles in the plays of Richard Greenberg and Nicky Silver and on screen in such independent films as "Pieces of April" and "The Station Agent."

"It's hard to articulate why you want to do it -- you just do," says Clarkson, betraying a slight Southern lilt in her voice. She's from New Orleans, which happens to be the setting of "Streetcar."

"Playing Blanche is like playing Hamlet," the actress says. "It's a classic part, but it hopefully can be redefined and reinterpreted because it is so complicated and dense."

Director Garry Hynes runs Ireland's Druid Theatre Company and first gained notice in New York for her direction of the plays of Martin McDonagh, particularly "The Beauty Queen of Leenane."

Hynes has directed "The Glass Menagerie" twice before (in Ireland) but this is her first "Streetcar."

"You try and get the purest possible sense of the play going into rehearsal -- that's hard," Hynes says. "'Streetcar' is full of famous lines and famous images.

"Williams is able to write about a vulnerability that just lays everything bare, particularly the loneliness of his extraordinary, indelible characters."

Kaiser has been able to attract other names to portray those amazing characters.

For "Cat on a Hot Tin Roof," directed by Mark Lamos, Mary Stuart Masterson will play the ambitious Maggie. Patrick Wilson was to co-star as Brick but withdrew to make a movie, and the role is still being cast.

Sally Field will star as Amanda in "The Glass Menagerie," Williams' potent memory play. Not yet set are the actors to portray daughter Laura, son Tom and the Gentleman Caller.