By the time Kansas University alumna Diana Dale found her Uncle Billy, he'd been dead longer than he lived.

Lt. William O. Wisner, a handsome 20-year-old P-38 fighter pilot from Dallas, disappeared from the skies over the Italian Alps in 1944. 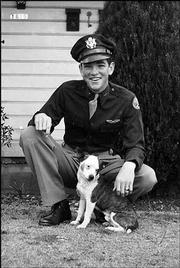 Lt. William O. Wisner, known to friends and family as Billy, is shown above with his dog. Billy's P-38 fighter plane disappeared over the Italian Alps in 1944. The telegram informing his family he was missing in action appears above. More than 50 years later, Kansas University alumna Diana Dale used the Internet to find the crash site and return Billy's remains to America.

The U.S. government told Billy's mother that his plane had last been seen diving toward earth about five miles from Bolzano, Italy. No one saw a parachute.

Despite writing hundreds of letters to the Red Cross, the War Department, other young men who had served in Billy's unit and their families, Ida got nowhere.

For years she clung to the hope that he had survived the crash but had been captured or had amnesia -- that he would return one day.

But in 1951, she slipped into Billy's scrapbook two copies of the program from a memorial service honoring the fallen soldiers from her son's high school. Billy was really gone.

It took Ida's determined granddaughter and the Internet to finally find him.

Dale documents her online odyssey in "Finding Billy," a thoroughly detailed book that not only chronicles her search for Billy 50 years after his death but also paints a vivid picture through photos and correspondence of the charming Texas youth killed three years before Dale was born and the heartache his disappearance caused his family.

In 1998, Dale, a Denver resident who grew up in Topeka, Wichita and Overland Park before graduating from KU in 1969, posted a message on an Internet bulletin board that specialized in military history.

Within 10 months, she received e-mail from a man who put her in touch with Jim Graham, who was compiling the archival record for the 2000 reunion of the 71st Fighter Squadron, to which Billy had belonged.

Graham had a copy of Billy's Missing Aircrew Report that included an eyewitness account of his accident. It didn't reveal any more than Dale and her family had always been told: that Billy's plane had been hit by falling debris from the midair collision of two other planes.

Graham encouraged Dale to write the American Graves Registration department, which in 1950 had gone to the area near where Billy would have crashed to investigate the site.

Deep within the thick file officials sent Dale, she found evidence that not only had Billy's "non-recoverable remains" been memorialized at the Florence American Battlefield Monuments Cemetery in 1951, but that in 1952 a fragment of Billy's remains had been recovered -- along with his military ID bracelet.

The family had never been told.

"I realized Billy hadn't vanished," Dale said on the phone from her Denver home. "I always thought he was stuck in a glacier somewhere or his plane had blown up and he was disintegrated."

But, she adds, "We still had a needle in a haystack to look for because the last known location we had was five miles either northwest or northeast of Bolzano. That's an incredible amount of territory, especially when you're looking in the mountains."

But Dale was not deterred.

Relieved but not finished

She tried with no success to get a hold of the file that contained Billy's bracelet. It was, unexplainably, missing.

Much later in her search, however, the file showed up in a Hawaii office. Dale held her breath as the woman on other end of the line unwrapped the package inside.

"After what seemed like hours, she finally got it open," Dale recounted to Graham in an e-mail. "'It's there -- Lt. William O. Wisner. The chain is broken, but it's there,'" the woman told Dale.

Looking back, Dale said she felt fortunate the file and bracelet took so long to surface because, in the mean time, she'd met a network of people here and abroad who wanted to help her find her uncle.

Among them were Paolo Cagnan, an Italian newspaper reporter, and Inga Hosp, who lived in the crash region and tracked down a farmer who remembered seeing a plane go down when he was 15 years old.

Dale was getting closer.

Hosp's farmer recalled going to the crash site after the forest fire it caused had been extinguished and seeing a pilot's burned body and an ID bracelet with two W's on it. Although a few small fragments of wreckage remained, investigators from the U.S. Mortuary Affairs Team determined this wasn't the point of impact.

Then an elderly hotel proprietor who grew up in the area came forward and said his uncle had helped put out the fire caused by Billy's crash. His uncle realized a few days later that Billy still had not been buried, so he wrapped him in cloth, buried his body and erected a cross on the site. The nephew knew exactly where the grave was because he passed it every time he took the sheep to and from the upper pasture.

The investigators found a piece of plexiglass, which they knew meant the point of impact, and enough wreckage to start an archaeological-style excavation.

This time they found Billy's dog tags, bits of his uniform, his U.S. insignia and enough bone fragments to do a DNA comparison with a blood sample from Dale.

It was a match.

Dale arranged for Billy's remains to be returned to the states and be buried in the same cemetery as his parents.

She later traveled to the crash site, where her friends had erected a memorial to Billy.

Diana Dale's parents commissioned this memorial plaque in 2002 to honor Dale's uncle, William O. Wisner, a U.S. pilot whose plane disappeared over Italy during World War II. It's displayed next to the stream that flows down from Billy's crash site in the Italian Alps.

She writes, " It was almost more than I could bear, and I couldn't stop crying. But I couldn't stop smiling, either, because this was the end of a lifetime of mystery. This is where Billy had been all along, and it was beautiful. I wished Idy and Papa could see it, and I couldn't wait to share the photos with Mother and Daddy."

Dale wanted a souvenir for her mother, so she picked a handful of blossoms from the flowers her friends had planted at the grave. They looked familiar, but she wasn't sure. She inquired; her friend answered: