Lawrence's I-70 Review runs out of fuel

The fledgling I-70 Review may be taking its last road trip.

The literary journal, first published by Lawrence poet Gary Lechliter in February 2003 and featuring mostly area writers, has promised submitting authors it will publish a second edition. But because of dwindling funds to put out the annual collection, it will either go online next year or dissolve altogether.

I-70's impending demise is symptomatic of an unpleasant reality for Kansas writers, Lechliter says: Literary arts are not a funding priority.

And it's not for lack of interest in the form.

"I've got 100 poems out right now to different publications. It's very difficult to get published now because there are so many poems to sort through," Lechliter says. "Poetry's blossoming because I think it's what we are as people. It's the inner expression. I think it's bigger now than it has been for a lot of years."

Despite the monetary road block for I-70, Lechliter, a vocational rehabilitation therapist at the VA hospital in Topeka, has found alternative outlets for his work. He published a collection of poetry called "Under the Fool Moon" in 2001 and is working on a second book. His work has appeared in several area journals as well.

Friend and fellow poet Silvia Kofler, whose work has been part of the first two I-70 Reviews and who teaches writing at Kansas University, published her first collection, "From the Suburbs With the Wedding Dress In Its Coffin," last year. Her poems also can be found in a range of area journals.

Both poets will read Friday during the fourth installment of the 2004 Lawrence Poetry Series, which Perry poet and publisher Jason Wesco started last year to give area poets another venue to share their work.

Kofler grew up in Austria but moved to the United States in 1979 with her husband, a U.S. marine she met while living in Paris. She has degrees from William Jewell College in Liberty, Mo., and the University of Missouri-Kansas City.

The earliest poems in her first book dealt a lot with personal turmoil caused by her divorce and the death of her brother, for instance. More recently, she finds herself being struck by works of art, situations or events in the media.

She didn't pursue writing seriously until about 1990, but growing up, she kept journals.

"I think I felt the page was patient," says Kofler, who lives in Kansas City, Mo. "I could express myself."

Uniquely, "To the Suburbs" contains poems written both in English and in Kofler's native German. The bilingual hook helped her snag a publisher, Edwin Mellen Press, which caters to academia.

Audiences at readings frequently ask her to read poems in German, whether they understand the language or not.

"I'm usually asked and I read two or three poems in both languages," she says. "People seem to respond to it and really want to hear that."

Like most writers, Kofler feels compelled to put pen to paper. She certainly isn't in it for the money.

"You write because you feel you have to," she says. "There's nothing more wonderful or satisfying than when you come up with just the right phrase and the right turn of words."

Kofler has been active in both the Lawrence and Kansas City poetry scenes the past several years. She even puts out an informal journal called Thorny Locust, which includes work by poets from across the country.

'Wave of the future'

"It's not postcard Kansas and not Wizard of Oz Kansas, but it's about real people that I've known," he says. "Some of them I grew up with. Some of them I've known as adults. Some of them are about some of the patients that I have dealt with in the past." 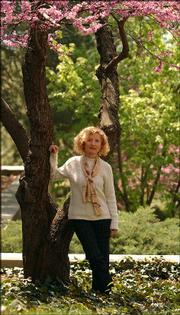 Silvia Kofler is one of two poets reading Friday for the fourth installment of the 2004 Lawrence Poetry Series. She is pictured on Tuesday outside Wesoce Hall at Kansas University, where she teaches creative writing.

He also has plans to do a bit of intrastate traveling to get poetic inspiration, perhaps visiting the Arikaree Breaks in northwest Kansas and the world's largest ball of twine in Cawker City.

Lechliter says he and Kofler will read a collaborative poem at Friday's event.

Born in Coffeyville, Lechliter lived in several Kansas towns before settling in Lawrence in 1994. He studied psychology at Pittsburg State University, where he took a creative writing class that turned him on to poetry. He later got a graduate degree in psychology at UMKC. He later took writing classes at the Lawrence Arts Center.

He finds that his psychology background filters into his work.

"I think Jung almost coined the term persona -- what we are and what we present to other people, that mask that we wear," Lechliter says. "I think poetry kind of helps strip away that mask and say this is what we are as people."

And if I-70 Review has to re-invent itself online to continue to provide an outlet for poetry -- that art which, Lechliter says, reveals something essentially human in all of us -- that's where Lechliter will put it.

"It's no disgrace to go online. There's some universities that have online poetry journals," he says. "That may be the wave of the future."