By By Lindsay Hanson

Even with the 10th anniversary of the Lied Center under their belts, those who've carried out the original vision for the center aren't prepared to relax.

"I'm going to be here all the time and see that they continue what we started in the beginning," said Lied Foundation trustee Christina Hixson, just before cellist Yo-Yo Ma and the Silk Road Ensemble took the stage Saturday evening.

With the initial seed -- a donation of $10 million from the Lied Foundation -- Hixson saw a venue that served people of all ages, colors and economic backgrounds spring to life. And with a subsequent $2.5 million donation in 1995, Hixson founded the Lied Performance Fund, which takes Lied Center performances to communities around the state and outside Lawrence.

After Saturday night's anniversary celebrations, current director Tim Van Leer knows there are plenty of people in the community who share Hixson's vision. Fifteen families played host to dinners Saturday evening for 300 guests before the performance. Combined, those who attended the dinners donated about $35,000 for community outreach. That money will help fund artist fees and provide free tickets to events to nonprofit organizations.

"People have ownership of this place," Van Leer said, gesturing toward the crowd of people in the foyer before the performance. "If I can create another night like tonight, that's all we need to worry about."

Ma's nearly two-and-a-half hour performance drew 2,000 people, a sellout crowd, from all over the state. It's common for audiences to come from various regions around the state these days, said associate director Karen Christilles, who has worked for the center nine of its 10 years.

When the Lied Center opened Sept. 28, 1993, it sold only about 5 percent of its tickets to people outside Lawrence. Now, the center regularly seats a crowd in which 37 percent of the spectators are from out of town.

Robert and Shirley Banks, Paola residents, make up part of that figure. As the first of three generations of Kansas University graduates, they drive the 60 miles to Lawrence about three times a year -- which is not as often as they'd like.

Carol and Cliff Wallace, Lawrence, have been volunteering as ushers through the Friends of the Lied Center for about four years. 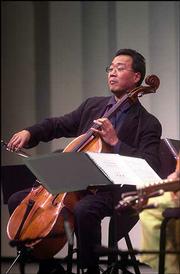 Cellist Yo-Yo Ma performs during a concert at the Lied Center. Ma and the Silk Road Ensemble played to a sellout audience Saturday evening as Kansas University celebrated the 10th anniversary of its performance hall on west campus.

The two are semi-retired, on a limited income and crave a regular dose of culture. They usher to meet people who are excited about the arts and to watch performances on a budget. Mostly, though, they say they come to take part in the magic that emanates from a venue that continually attracts world-renowned performers.

Several years ago while on vacation in California, they stopped by the similar-sized arts venue on the Stanford University campus to see how it stood up to the one at Kansas.

"It was really nice, but it doesn't hold a candle to the Lied Center," Cliff Wallace said.