By By Emily Criqui - Special to the Journal-World

"Good evening, ladies and gentlemen. My name is Yo-Yo Ma, and I will be your cellist this evening."

Ma's stage demeanor was soft-spoken and humble. And although he was certainly the star whose name packed the house, he was not necessarily the focus of Saturday night's concert at the Lied Center.

The evening opened with a beautiful cello solo by Ma. His lilting phrases filled the Lied Center from front row to back balcony, and the audience hung on every turn and stroke of his magical bow. However, it soon became clear that Ma was not to be the only, or even the featured, performer of the evening.

As founder and artistic director of the Silk Road Ensemble, Ma's primary role included bridging the gap between culturally differing musical styles and performers. The ensemble explored cultures and musical forms outside of Western classical traditions and fused them together. It was an East-meets-West collaboration where each distinct element remained intact, honoring its roots while projecting its branches along the global highway and encouraging fellow travelers to participate in a musical evolution.

The end result was an experience as rich in color and texture as the rugs that lined the Lied Center stage. The mix of cultures and instruments was at once an aural and visual metaphor for the group's fantastic mission, leading the audience down a symbolic Silk Road, a musical trade route between China, Azerbaijan, Armenia, Iran and North America.

Also included, and perhaps the most appropriate representation of the ensemble's artistic goals, was the "Music of the Roma." The nomadic Roma, also known as "Gypsies," reflected the rich musical cross-pollination of a borderless people who traveled along the Silk Road in 300 B.C.

The result was so intoxicatingly energetic that audience members had trouble containing their enthusiasm, their own energy spilling out in bursts of applause between movements and during brief pauses.

In the end, when the audience rose and applauded through multiple curtain calls and three encores, they were responding to the fruition of a collaborative vision, to the blending of innovation and tradition. 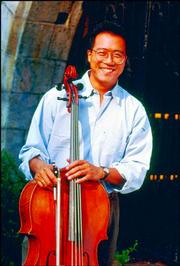