New York — It's been 30 years, but Penn & Teller have no intention of pulling a disappearing act.

The pair are performing their boisterous, occasionally macabre magic act six days a week at the Rio All-Suite Hotel & Casino in Las Vegas, and are planning a video version of the show. Penn has a novel coming out this spring. Teller, the small, silent partner, recently wrote a memoir about his parents.

Also, the second season of their trickster-exposing TV program is on Showtime, with a title that's an expletive for "nonsense!"

"I think you're supposed to mellow out as you get older. Elvis Costello is doing jazz, and you don't see Axl Rose running around all crazy like he used to," said Penn Jilette, the taller, louder part of the group, who is 49. "But I think we've gotten a little bit harder and more skeptical as we've gotten more successful."

"We've never planned and strategized, and it's just worked so far," said Teller, 56, who is as articulate in interviews as he is mute onstage. "We just thought we'd do things that were interesting to us, and see if the public was interested in it. It is inexplicable to me, but there are enough people that do have the same interests so that we have an audience."

The two began working together in 1974 after a mutual friend introduced them. Teller was teaching Latin and Penn had just graduated from clown college.

"In order to remain in show businesses you have to want obsessively to be in show business," Teller said. The friend "was a much more civilized person than Penn or I, and didn't want to continue."

Meanwhile, Teller was honing his silent skills, an idea that came to him after he watched magic shows. "Magicians say inane things all the time, like, 'Here I am holding a red ball,"' Teller said with disdain. "I thought, 'What if I just took the speaking away.' You'd have to watch what I was doing, and I couldn't distract with my speaking and it would be a bigger challenge." 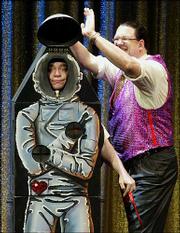 Penn Jilette, right, performs with partner Teller during their show at the Rio All-Suite Hotel & Casino in Las Vegas. The pair have been practicing their unique brand of entertainment and magic for 30 years.

Penn, on the other hand, realized that his strength was in talking, and the combination of their approaches worked. Plus, the two shared a common skepticism, which helped create their schtick of revealing the way they perform some tricks.

"We were doing this kind of magic that said, 'Look, we know it's all a scam, it's a swindle, and we're skeptics ourselves,"' Penn said. "That was really different from what magic usually aligns itself with -- the hippy dippy stuff."

In 1987 they began the first of two Broadway runs, and they had several national tours during the 1990s. Then came appearances on late-night talk shows, several TV specials, a movie and their show in Vegas.