For thousands of years, Western culture has regarded bread as the "staff of life."

These days, however, more Americans seem to view bread as the kiss of death.

That's because millions of people in this country -- as well as many Lawrence residents -- have adopted low-carbohydrate diets that push proteins and cut carbo-laden foods such as pasta, potatoes and bread to a minimum.

The baking industry is in a sales slump, and Lawrence bakeries are taking note of the trend toward low-carb diets that has placed bread on the hit list of foods to be avoided.

Some bakeries in town are making special efforts to provide customers with more information about the nutritional value of bread as well as some of the drawbacks of low-carb diets.

Others are introducing low-carb products. And a few Lawrence bakeries are sticking to their guns, offering the same products loyal customers have loved for years. 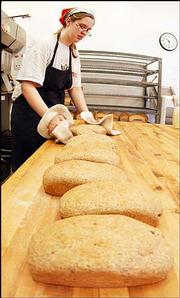 Baker Bri Hickman, Lawrence, transfers low-carbohydrate bread to the cooling racks at Great Harvest Bread Co., 807 Vt. The Atkins diet craze has affected many businesses like Great Harvest, which sells high-carb items such as breads and cookies. Subsequently, the bakery has introduced a bread with most of the wheat flour taken out, which reduces the amount of carbs.

Chuck Magerl, a longtime Lawrence restaurateur, has witnessed the trend.

"Sure, we're noticing it both at Wheatfields Bakery, as well as Free State Brewery," Magerl said. "We have more customers who are subbing items on their plates, removing bread products, replacing french fries with vegetables or salad, things of that sort. And in the retail bread sales at Wheatfields, we've definitely noticed an impact from people's concern about bread intake."

He is the managing partner of Wheatfields Bakery & Cafe, 904 Vt., and proprietor of Free State Brewing Co., 636 Mass.

"I would say it's having about a 4 percent impact on our bread sales (at Wheatfields). I think even people who aren't following the Atkins diet, there's been so much media devoted to it that other folks are thinking, 'Well, maybe I'll still buy the products I like, (but) maybe I'll just reduce how quickly I'll consume them.'"

Magerl said he had read, in national trade publications, of sales declines in the bread and pasta industries of 10 to 15 percent.

Along with that has come increasing demand for low-carb products.

To learn more about low-carbohydrate diets and the affect they are having on the food industry, check out these Web sites:

"Not a day goes by that a customer doesn't come up to the counter and ask if we have low-carb bread (at Wheatfields)," Magerl said.

But Wheatfields is sticking with its signature, artisan-style traditional breads, while also working to educate customers about the health benefits of whole-grain breads and other "good" carbs.

"We've discussed it in the last one or two years, but the quality of the breads we wish to serve are not enhanced by the alternative ingredients that typify low-carb bread. The taste and the texture are troubling," Magerl said.

"We started to notice it (the trend) a couple of years ago, with people saying, 'Oh, I can't eat bread,' or starting to ask, 'Do you have anything low carb?'" Garrett said.

"For a year or so we ignored it. Then, when bakeries started to see that it wasn't going away, we needed to develop a tasty, low-carb bread that we felt deserved our name on it."

The store sells about 20 loaves of low-carb bread per day. Customers pay $4.50 plus tax for a loaf that weighs about a pound and a half.

"People are willing to pay a premium for it. That's the reason the bread industry hasn't resisted it more strongly -- they're making a premium on it," Garrett said.

So what, exactly, is a carbohydrate?

This is a broad category of sugars, starches, fibers and starchy vegetables that the body eventually converts to glucose, the body's primary source of energy, according to Epicurious.com. There are two classes of carbohydrates: simple and complex. Simple carbohydrates are the sugars, which include glucose and fructose from fruits and vegetables; sucrose from beet or cane sugar; and lactose from milk. Simple carbohydrates are absorbed by the body very quickly.

But the popularity of low-carb diets has had some effect on his store's bottom line.

"Given the number of people who say they're not eating bread, it can't help but have negatively affected us," he said.

Garrett and his employees are trying to educate customers about the role that carbohydrates and whole-grain breads can play in a healthful diet, making nutritional information available, such as a handout titled "10 Reasons Why a Low-Carb Diet is Wrong."

"Study after study shows that whole-grain carbs help prevent cancer and weight gain. I don't understand how people have been so misled. It irritates me that people will latch onto something so shallow as the sound bite 'all carbs are bad,'" Garrett said.

"Our bodies are designed to run on carbs -- that's as basic as it gets."

Customers who are on low-carb diets will have more options when they visit Panera Bakery & Cafe, 520 W. 23rd St.

St. Louis-based Panera Bread will do a national rollout of several low-carb breads May 26. That will include the Lawrence store, according to Eric Cole, franchise operations manager for Original Bread, Inc., a franchise group that has 20 Panera stores in the Kansas City area, Lawrence, Topeka and Wichita.

There will be a new, asiago cheese low-carb bagel with 11 net carbs and a new plain bagel with 13 net carbs. There also will be an Italian herb loaf, a golden original loaf and a rosemary walnut loaf. A low-carb Italian herb breadstick will be served with soups and salads.

"The corporate company (Panera Bread) is coming out with low-carb breads, so obviously there is enough of a need," Cole said.

"We do have a certain number of people who request it (low-carb products). The funny thing is that they ask you as they're gnawing on a piece of bread."

Other longtime Lawrence bakeries say the low-carb trend hasn't affected them much, and they're going to continue offering the sweet, carbo-laden treats that their customers have come to expect.

At Munchers Bakery, 925 Iowa, that means mini cinnamons, cream cheese doughnuts and brownies. The store, which has been in Lawrence for 27 years, is open 24 hours a day, seven days a week.

"It (the low-carb trend) may have affected us a little, but not much. People are habitual in what they eat. I have so many regulars, I know what they want before they hit the front counter," said Sunday Martin, manager of Munchers for the past 15 years.

The increasing popularity of low-carb diets has left a huge imprint on the food industry. Bread sales are flat or down slightly, and bread bashing seems to be at an all-time high.

The National Bread Leadership Council, which says 40 percent of Americans are eating less bread than a year ago, convened a summit in November focusing in part on low-carb diets.

More than 17 percent of the nation's households report that at least one person is following a low-carb diet, according to research firm AC Nielsen.

The number of low-carb specialty products has exploded, with roughly 1,200 items on the market, including margarita mix and tortilla chips. An average of 10 new items are added each week.

And though widely available at most grocers, those products are headlined at some 400 low-carb stores, with two new stores opening weekly.

"We don't even carry artificial sweetener. It's a bakery -- we use sugar in the products and for the coffee," Martin said.

It's the same story at Joe's Bakery, 616 W. Ninth St., which has been famous for its glazed doughnuts and egg salad sandwiches since the early 1950s.

"When you're in the bakery business, there's always the decision whether to ride this train here (the low-carb trend) or keep selling the sugar. I don't know whether it's the newest fad, or it's here to stay. It seems like every bakery is putting out a low-carb something," said Ralph Smith, owner of the store since 1981.

Smith isn't sure how much the rage for low-carb diets and products has affected his business.

"It's so hard for me to tell what it is," he said. "Certainly the baking industry is in a tough time; I've seen big corporations say that. It's bound to affect me some. Customers are kind of like, 'I want my doughnut, and I want it guilt free.' It's hard to do."

"That's a pretty big change for a little bakery that's sold you white flour and sugar (for years). At some point, I probably think I will. I'm diabetic, and I need to go that route myself -- whatever I can do to lighten it up," Smith said.

He learned how to make doughnuts the old-fashioned way, and his training resists the change to low-carb baked goods.

"I was trained in making it out of white flour and white sugar and lots of margarine and making it hot and greasy," he said.