There was a soothing irony, Bryce Yarborough thought, about his last moments of life.

The recent University of Missouri graduate had looked down the barrel of a gun in Oregon, narrowly escaped being raped by a man in Los Angeles and somehow avoided plummeting off a cliff while catching a ride from a drunk stranger in Montana.

Yet after all that, he was about to freeze to death on a highway between Kansas City, Mo., and Springfield, Mo. -- the two cities he considered home.

"I picked up my backpack and walked toward the store. My body was numb. I felt nothing except heaviness, as if the snow beneath my feet was sucking me into the earth ... I'm not going to make it," Yarborough writes in "Close Calls: Narrow Escapes Living on the Road" (1stBooks, $18.95), his recent book about the decade he spent hitchhiking across the country.

But then if he's written a book about his brush with an icy death, he obviously survived.

The Overland Park resident has been asked so many times by friends to recount his most harrowing experiences on the road that he decided to write them all down in one place.

"I thought it would be good to get those out there, so I don't have to tell those stories anymore," he says.

The collection is sure to inspire nostalgia among those who remember the thumbs-up pleas of roadside vagabonds during the '70s and '80s.

Yarborough set off on his soul-searching odyssey in the mid-'70s after marrying and divorcing young and then overdosing on depressants.

"I was on the road to destruction. That's when the realization came: Make a change," Yarborough says. "And I thought, 'What have I always wanted to do?' I've studied about all these places all around the world, it's time to go see them."

So Yarborough, then 22, packed a sleeping bag, tent, backpack, guitar and, with $400 in his pocket, pointed his Dodge Polara toward Montana. Midway through Nebraska, he picked up his first hitchhiker, Brent, a Kansas farm boy who became Yarborough's first and only hitchhiking mentor.

Brent taught by example, checking Yarborough's oil and washing his windshield during pit stops. He advised Yarborough to line up behind -- not in front of -- other hitchhikers on the freeway so those who had been there longer got the first shot at passing cars.

Yarborough ended up getting busted for possession of marijuana during his first trip to Canada and, low on funds, he abandoned his car in Oregon and began his hitching expedition.

Yarborough's trusting nature got him more mileage than anything else. 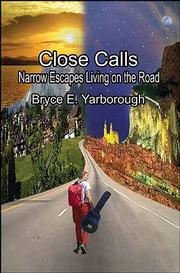 "I jumped into every car that stopped. If people stopped, I thought, 'They're nice enough to stop. Just throw your stuff in and go. And I wouldn't recommend anyone do that, but I did, and I learned a lot from it and I don't regret having done it since I survived it," Yarborough says. "But I can see how a lot of hitchhikers just disappeared and were never heard of again. I have no doubt that happened."

Hitches along the way

From 1975 to 1985, Yarborough was under the influence of drugs and alcohol. His drug of choice was marijuana, but he also dropped acid and dabbled in a few other substances.

What becomes clear early in "Close Calls" is that most people who picked up hitchhikers did drugs, too. Yarborough was often sharing a complete stranger's joint within the first few miles of meeting them.

But his naivete -- and the inevitable odds of encountering a bad seed after accepting hundreds of rides and favors from perfectly nice people -- got Yarborough into trouble more than once.

When he kicked a pay phone on a Los Angeles beach that had eaten his last 87 cents, Yarborough was approached by a tall, muscular man who offered to let him use the phone at his condo across the street. After he'd made a call and downed a glass of juice, the man asked him about his sexual preferences and then grabbed him from behind, squeezing until Yarborough thought he might pass out and be raped.

But then, as during other times Yarborough found himself in sticky situations, he went with his intuition. He relaxed his body, slipped out of the man's arms and talked him out of whatever he had in mind.

Another time, Yarborough climbed into the passenger seat next to a giant man who "looked more like a rhinoceros without a horn than a human being." It wasn't long before the man began undressing Yarborough with his eyes and offering him cash in return for sexual favors. Yarborough was fully prepared to jump out the door when the man pulled onto an off-ramp and let him out.

But you have to put such close calls in perspective, Yarborough says.

"You have to remember out of these close calls that probably if you added up all the time in these close calls, there were maybe a couple of days in terms of time. I was out there for 10 years," he says. "The vast majority of people are good people, hardworking people."

Yarborough traveled throughout the United States, Canada, Europe, Mexico, and parts of Central America, South America and North Africa. He worked odd jobs to support his rambling habit. He waited tables in New York and California, framed houses in Alaska, trimmed coconut trees in Hawaii, picked grapes in France and worked as a street musician.

Eventually, he gave up drugs and hitching, finished his journalism degree at Mizzou and worked as a newspaper reporter in Colorado before becoming a newspaper editor on a cruise ship. He later returned to Kansas City, where he played in a rock band and worked as a travel copywriter and public relations professional.

He lives with his wife and two cats and is working on a collection of books about his travels and a follow-up to his first collection of inspirational poems.

He's doing what makes him happy, he says, which is probably the healthiest lesson he picked up during his days as a rolling stone.

"I think the biggest thing I learned from my journey was basically the purpose of life and why we're here, and that's to enjoy life," Yarborough says.