Carnahan's "Don't Let the Fire Go Out!" only lukewarm 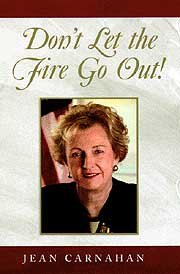 Former Missouri Gov. Mel Carnahan made international headlines when he was elected to the U.S. Senate after his death in a plane crash just days before the 2000 election. His wife, Jean Carnahan, campaigned in her husband's stead and served in Washington for 2 years, becoming the first female senator from Missouri. Now, four years after tragedy struck her family, Carnahan has published her memoirs. The book's title "Don't Let the Fire Go Out!" was Jean Carnahan's campaign slogan and mantra after her husband passed.

When Mel Carnahan was elected to the U.S. Senate shortly after his death, many people believed it was mainly "sympathy votes" that were cast. Whether or not that is true, Jean was elected and spent two short years in the Senate before running for re-election. On her second time around she lost. In the book Jean blames her loss on a number of factors, including short campaigning time. little money, and a new republican president to influence the state's voters.

After reading this book, I came to the conclusion that maybe Jean Carnahan is not a woman who belongs in public office. Far from humble or altruistic, Carnahan's writing suggests she is self-absorbed and materialistic. Her description of helping during the 1993 Mississippi flood make her sound like a saint for filling sandbags for half a day. She describes going out on a limb to hug a prison inmate whose dog has just died, suggesting that this was an ambitious thing to do.

But one of her most infuriating comments came when describing the people who campaigned for her before the 2000 election. The situation is described as a "sweatshop" with shifts of volunteers working on the floor or the stairs "around the clock." But despite their tireless efforts, Carnahan "was not there to see all that went into this effort, but I heard the stories." This is one of many times in the book where her staff appears more dedicated to her office than she does. It is clear that Jean Carnahan lacks the charisma and people skills that served her husband so well.

Carnahan speaks of her late husband reverentially, saying that he was a true public servant, not a "professional politician." This may be true, but it seems contradictory to her later statements that Mel wanted to be a Congressman at age 15, that he worked as a politician almost his whole life, and that he came from a long line of politicians.

This is not to in any way diminish the great misfortune that befell the Carnahans. Jean undoubtedly suffered a tragic loss when her husband, son and friend were died in the plane crash. A memoir about that hardship alone would make for a compelling story.

But Carnahan speaks very little about her inner struggle during that time. Instead, she describes how she modeled the funeral after 19th century funeral procession for Gov. John Marmaduke and what kind of horse-drawn carriage she decided to use.

In this book I expected to find inspiration and advice from a woman who persevered through tough times. Instead, I found worthless quotes and anecdotes from an obviously self-absorbed snob.

These countless citations became one of the most annoying things about Carnahan's writing. Sometimes as many as four cliched quotes would litter a single page -- anything from Charlie Brown, to Strom Thurman, to Winston Churchill. The words and sketches of many great politicians got lost as Carnahan placed them one on top of another, drowning any significance they might have.

The moments of humor are brief and far between. She tells of President Clinton's penchant for answering the phone when Chelsea's friends called and of not being known by her husband's secretary. But as a whole, Carnahan lacks the skills of a good storyteller.

Good storytelling can make or break a memoir. Often times the most banal tidbits can be the most revealing. But when Carnahan speaks of laundry day during the Depression era, or her childhood "Shirley Temple curls" she does so without spark; she's simply not a writer. While the events of her life over the past five years were surely worthy of a good book, Carnahan has ignored matters of importance, concentrating instead on the trivial.