Forget finesse. Lacrosse players take a beating on the field of hard knocks

Kansas University junior Nate Macon, left, of the KU Men's Lacrosse Club, tries to get an open shot as freshman Matt Elder roughs him up a bit.

As soon as the practice begins, so does the hitting.

"Damn, C.J.!" says one frustrated player after getting knocked to the ground by a teammate at a recent afternoon practice of the Kansas University Men's Lacrosse Club at Broken Arrow Park.

There's a metallic clank of lacrosse sticks as players whack and slash at each other, trying to knock loose the solid rubber ball from the pocket at the end of a teammate's stick.

Within minutes, one player gets hit under the chin by the goalie's stick. He's briefly stunned.

Then it's the goalie's turn.

Kent Domas, a lanky KU sophomore from San Antonio, takes a shot to the groin, and the sound of the ball rocking into his athletic cup resounds across the playing field.

Ryan Wallace stretches with his teammates before a practice at Broken Arrow Park.

He staggers to the side of the field, drops to the ground and tries to catch his breath. A teammate comes over to offer his fallen comrade a drink of water from his squirt bottle.

"Cups don't work -- they just resonate," Domas will later announce to his teammates, after regaining composure.

He's the guy who, moments earlier, caromed the ball off Domas' groin, and he's referring to his teammates playing the midfielder's position. They're called "middies."

Then Ryan Wallace, a senior from Overland Park, walks off the field. He lifts his shirt to reveal a nasty, red welt across his side, right over his left kidney. He just got it from a slash -- an illegal hit to the body by an opposing teammate's stick.

"Lacrosse is a lot like football. You get pretty banged up," concedes Wallace, a midfielder.

Then it's back to practice.

Speed and impact
Welcome to the KU Men's Lacrosse Club, where everyone on the 32-man roster of the sub-varsity team absorbs his share of hard knocks.

That's why players are outfitted with protective gear that makes them resemble some kind of fast-moving military squad: cleats; chest pads covering the shoulders, upper arms and back; pads for the lower elbows and arms; gloves; a helmet; a mouthpiece -- and an athletic cup.

Enhancing the martial air of the sport are the titanium sticks the players carry, called crosses, which vary in length from 40 to 72 inches, depending on the position you play on a 10-man team.

It's a contact sport, and players know that absorbing some punishment comes with the territory.

"Everybody gets banged up. Shins get bruised; your arms get bruised from holding the sticks. Last week at Nebraska (University of Nebraska in Lincoln, which has a rival club), we were dropping guys left and right," says Wallace, the club's vice president.

"I dislocated my shoulder last year. I've been hit in the throat. I got smashed in the chin with a helmet."

"You get your bumps and bruises, that's for sure. The defensemen are the ones that do the beating; they're the ones with the six-foot poles," says Moxley, who plays at the attack position.

"I've had anything from pulled muscles to broken fingers and a dislocated knee."

Eric Hethcoat, the club's volunteer coach for the past two years, describes the physicality of lacrosse.

Kansas University junior Nate Macon, center, attacks the goal with freshman Matt Elder playing defense and sophomore Kent Domas as goalie. Defenders try to knock the ball out of the player's stick by checking with their own stick. The three play for the KU Men's Lacrosse Club.

"It's extremely tough, with a lot of speed and impact. There's two types of players: the bigger-bodied guy who likes to hit people and the finesse player who uses his skill to get by people," says Hethcoat.

He's a Lawrence resident who played on Kansas State University's lacrosse club before graduating in 1999.

"It's the fastest game on two feet. You're hitting people like in football and rugby. But it takes a fair level of skill, because you're catching a small ball with a small mitt (the pocket at the end of a Lacrosse stick), and you're passing it between five and 100 yards."

Predicting big future
Lacrosse hasn't yet attained the status of football, basketball or soccer in the Lawrence area, but it's making inroads toward mainstream recognition.

"I do think it's growing in Kansas," said Tasha Trelfa, a junior from Denver who plays center on the KU Women's Lacrosse Club.

"They've started to have some high school teams in Overland Park. My boyfriend coached a team at Blue Valley High School. I think lacrosse got to St. Louis, and then it kind of skipped Missouri and Kansas, and picked up again in Denver."

Women play lacrosse, too, but the rules and the sticks they use are different than they are for men's teams. There's less contact, and the women don't wear protective pads or helmets.

The women's team has played at KU since 1997. Dave Wiley, program coordinator of KU's office of study abroad, has been the coach for seven years.

Trelfa has watched as awareness of lacrosse has grown in Lawrence. 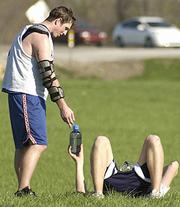 Nate Macon offers Kent Domas some water after being beaned by the ball from a shot. Goalies often get pegged by shots aimed for the small lacrosse goals.

"When I first moved here from Denver, I broke my stick, and I went in to one of the sporting goods stores on Mass Street. I said, 'Do you carry any lacrosse equipment?' and they did not even know what lacrosse is," she says.

"Now I know there's one store for sure, and possibly two, that carry all the lacrosse equipment -- guy's and girl's sticks, balls, pads. It is changing."

Brendan Goss, a senior from LaGrange, Ill., picked up the sport for the first time when he started playing on the KU men's club last year.

"St. Louis is a hotbed for Midwest lacrosse, it kind of jumps over Kansas, then Denver is a hotbed. It's even spreading out to California."

"This is my prediction: It'll be the king sport of spring within 15 years. I think every high school will have it. People won't be surprised that you play lacrosse."

Sport originated long ago with American Indians
Though often thought of merely as an East Coast, prep-school sport, the origins of lacrosse go back much further.

The game has been played for centuries and is considered the oldest sport in North America.

American Indians often played a forerunner of lacrosse, known as "the Creator's Game," to resolve conflicts and develop the character and strength of men.

Lacrosse also served as a kind of war game. As many as 1,000 players per side, from the same or different tribes, would take turns participating in the contests.

It's believed contestants played on a field from one to 15 miles in length, and games sometimes lasted for days.

Many American Indians today are familiar with a game called stickball.

"It's identical to lacrosse. It's commonly played by the Southeastern tribes, primarily the Cherokee, Choctaw, Chicasaw and Creek," says Cornel Pewewardy, associate professor of education in Kansas University's department of teaching and leadership.

"Those are the tribes that brought stickball from their original homelands in the Southeast to Oklahoma."

Pewewardy, a Comanche, is also the adviser to the First Nations Student Assn. at KU.

Rules of the game
Here are some of the basic rules of men's lacrosse, according to the Web site of US Lacrosse, the national governing body of men's and women's lacrosse:

A lacrosse player's gear includes helmet, shoulder pads, elbow pads and gloves as well as a stick and ball.

Men's lacrosse is a contact game played by 10 players: a goalie, three defensemen, three midfielders and three attackmen. The object of the game is to shoot the ball into the opponent's goal. The team scoring the most goals wins.

Each team must keep at least four players, including the goalie, in its defensive half of the field and three in its offensive half. Three players (midfielders) may roam the entire field.

Teams change sides between periods. Each team is permitted two timeouts each half. The team winning the coin toss chooses the end of the field it wants to defend first.

The players take their positions on the field: four in the defensive clearing area, one at the center, two in the wing areas and three in their attack goal area.