Masonic Temple back on block

Potential buyers likely would need to gut inside of landmark building 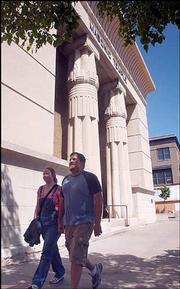 The future of the Masonic Temple, 1001 Mass., is in question after a deal to convert it into an entertainment venue collapsed. Pedestrians walked by the building on Monday.

The real estate agent for downtown's Masonic Temple is optimistic a new buyer can be found for the property since a deal to convert it into an entertainment venue fell apart.

But Doug Brown, commercial real estate agent with Coldwell Banker McGrew Real Estate, said Monday he was concerned that new buyers likely would have to gut the turn-of-the-century interior of the landmark building, 1001 Mass.

"That would be sad because it would take away from some of the charm," Brown said.

A group of Lawrence investors announced last week that they had allowed their contract on the building to expire. The group, led by Lawrence recording studio owner Jerry Johnson, had planned to convert the 92-year-old, 22,000-square-foot building into a venue for concerts, wedding receptions and other special events.

Johnson said the group was unable to finalize the purchase of the property because of financing problems. He said, in particular, a city requirement that 55 percent of the business' revenue come from food in order to obtain a liquor license became problematic. He said that requirement would force the business to enlarge the building's kitchen, which increased costs by about 40 percent.

Johnson, who also owns Lawrence-based Neighborhood Studios, said the group was working on a new proposal to buy the property, but he was not optimistic of reaching a deal.

"I don't know what's going to happen to the building now," Johnson said. "What else are you going to do with it? I think we had the best use for it, but it has to work financially."

Brown said he had a list of about 20 potential buyers for the building, which has a listing price of $775,000. He said investors had expressed an interest in using the property as a restaurant, retail use, office building or a mix of uses, including residential.

Brown said potential buyers likely would have to completely renovate the inside of the building. That would mean a loss of the nearly 30-foot-high ceilings, its ornate stage and balcony, and an antique organ.

"That was the nice thing about this particular buyer," Brown said. "They were interested in maintaining the integrity of the building."

Tom Wilkerson, executive secretary of the Lawrence chapter of the Scottish Rite, said the group would hate to see the building significantly changed but understood that might be necessary.