Mayday Movers :: Activists and artists team up for a night of socially conscious revelry 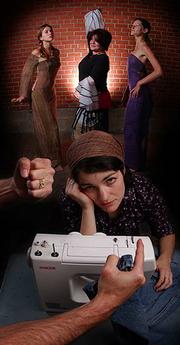 Anti-sweatshop fashion designers are on a mission to change the way that consumers of fine clothing go about doing business. Some of their designs can be seen at "Mayday," a fashion show that features recycled and naturally-made clothing by local designers. Clockwise from left: Stella Miner, Loni Hosking, Joni Harbeck, and May Kuhn.

When America wakes up May 1, most people won't be going to work. This year, Mayday -- a day historically tied to working-class resistance towards unfair labor practices -- falls on a Saturday, meaning that all of us working-class minions can celebrate our liberation from our bourgeois oppressors by getting loaded in the parking lot of Kauffman Stadium and gorging ourselves on dollar dogs.

Or if that doesn't quite grease your skillet, a group of local movers and shakers has another idea: a fashion show, followed by an art show, followed by a dance party. Though all of the aforementioned activities occur frequently along the flanks of Mass. Street, these particular happenings are united by a common thread: politics.

"There's the whole proverb of the thousand mile journey that starts with one step, but at least you're starting something," says Dave Best, a coordinator for the KU Green Party, which is organizing Mayday Anti-Sweatshop Fashion Show at the Lawrence Arts Center.

"Somebody that's never thought about these issues ... it could be their first baby step on that journey."

The journey begins with the anti-sweatshop fashion show, makes a pilgrimage down the street to a politically charged art show at Henry's on Eighth and concludes with a night of sweaty, Socialist-informed dancing at Dance!Dance!Revolution (this particular revolution will liberate the Jackpot Saloon, 943 Mass.).

Must Not Sleep, Must Warn Others...

Organizers of the respective events decided to coordinate after discovering they had much in common and could potentially be competing.

Trash to treasure
The fashion show will feature the work of six local designers recognized for their recycled fashions and environmentally conscious styles. Members of the KU Greens took on the task of organizing the show despite having little previous experience producing fashion shows.

"We still don't have a (presidential) candidate to really work on campaigning for ... so we focused a lot of our efforts on grass roots," said organizer Laura Adams. "We've really focused on recycled clothing, reconstructed clothing, natural dye ... really the alternatives and sustainable models of clothing and fashion, and showing how those are still fashionable."

Loni Hosking seemed a natural fit for the show with her secondhand approach to fashion design. Hosking, also a candle maker at Waxman Candles, uses everything from old jean jackets to tire tubes to license plates to craft her purses and garments.

"I think the reason why I like doing the recycled stuff is that there is just such a saturation of clothing in the market; I mean, go to a thrift store and see how full the racks are," she said. "A lot of my garments are hacked-up Gap clothing, because it's good quality and it's nice fabrics and nice color choices."

Designer Stella Miner said being invited to the show encouraged her to question the ethics of her own work. Miner, who specializes in using natural dyes, called her fabric provider to ask about the company's labor practices.

"They thought it was funny that I called and asked," Miner said. "Frankly, I wasn't sure. I mean, most people aren't, and most people really don't think about it. They just think it's magic; that your clothing just instantly appears."

Righteous robes
Besides showcasing the work of local designers, organizers of the fashion show hope to educate attendees on how to shop consciously and where to find non-sweatshop produced clothing.

Amanda Harrison, who came up with the idea for the fashion show, suggested shopping at resale stores and buying American Union-made brands.

"Unlike a lot of other things - like coffee, tea, etc. that you can get Fair Trade - clothing is really hard to find that's not made in a sweatshop," Harrison said. "I can't say everything I buy is not going to be sweatshop stuff, but online particularly, there's so many alternatives. It can be challenging, but you have to decide if it's important to you."

Organizers have also been soliciting donations from sweatshop-free brands like No Enemy, a California-based company that prints its designs on organic t-shirts and only uses materials made by workers who earn a living wage.

"If it doesn't make it really obvious on the label that it's made in a good way, it's probably not," Cheatham said. "It's really hard to make clothing in the United States, so if some company is going to go to the effort to make clothing in the United States (they're going to promote it that way). The opposite is also true if you're making your clothes in Thailand, paying people 30 cents an hour; you're probably not going to make that visible." 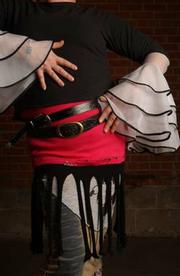 No sleep for Lawrence
Fashion show attendees can continue their socially conscious revelry by hopping down the street to the "Must Not Sleep, Must Warn Others" art opening at Henry's on Eighth Street. The politically oriented art show, which will run through May 31, will showcase oil paintings from Jay Gordon and paintings, prints and T-shirts from Matt Ridgway as well as smattering of other local artists.

Gordon's newest paintings blur and obscure war images to provide commentary on how war has become part of our daily lives and culture.

"It's to the point where it's almost become entertainment," Gordon said. "You have (war) stats scrolling across the screen now like a basketball game."

Much of Ridgway's work blurs the line between art and propaganda. A recent series of pieces juxtaposes images of popular political figures with very pointed slogans like "The Burning Bush is Fueled by Oil."

"I kind of just like to come out and say it," Ridgway said. "My job in making art that's political is not necessarily to bring about the change through the art, but to make people aware of the problems and the need for the change."

I hope you dance
Dance!Dance!Revolution, by contrast, probably contains the night's vaguest political messages. A typical event involves sweaty dancers gyrating to the pulse of electro and post-punk music while homemade propaganda videos sputter on a giant projection screen. Dancers are encouraged to submit to the revolution by dressing in all red and black (bonus: a $2 discount).

Organizer Mark Hurst said the Dance!Dance! team uses politics more as an aesthetic than to convey a specific message. 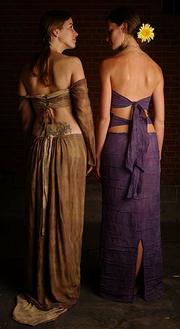 "The dance floor and dancing in itself is sort of its own political action and its own political party," he said. "I think one thing that we all agree on is the fact that we're trying unify everybody in the themes and ideas of dancing, and that sense of revelry."

Though the group does not espouse a particular political agenda, its leaders do encourage active participation in politics.

"If Dance! Dance! Revolution was a (political) party per se ... it would probably be supportive of the issues that are going to be brought up (in the fashion show and art show)," Riley said. "All of it's sort of anti-establishment; questioning what's going on in the world as far as politics goes."

"We're not trying to tell people how to dance or what the right way is to dance - we just want you to dance."