New York — "ER" star Noah Wyle has watched every other member of the original cast make an exit from the 10-year-old medical drama.

But for Wyle, there's nothing wrong with steady work on a hit series, even as you say goodbye to old friends.

"Those two shows came on the air at the same time (fall 1994)," Wyle said. "We sold them together. We promoted them together." He even guest-starred on a "Friends" episode.

"The day the cast filmed their last episode, I saw them in the commissary. It was heavy. Here they were, closing a defining chapter in each of their lives, and all I could do was think: 'The end of that chapter's coming, for me."'

Don't quake, NBC! Sure, you'll be losing your biggest comedy in just a week. But your biggest drama, "ER," another staple of your "must-see" Thursday lineup, will close out its season with new episodes the next three weeks, then stay put in its 9 p.m. Central berth for its return next fall.

Why is simple. Unlike George Clooney, Anthony Edwards, Eriq La Salle, Julianna Margulies or Sherry Stringfield (who left "ER" in 1996, then returned to the fold in 2001), Wyle hasn't found a compelling reason to make the break from a series he still loves. 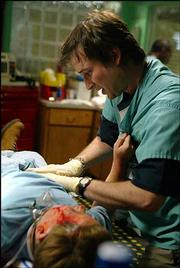 "I find the job extremely gratifying," he says during a recent visit to Manhattan, "and the story lines are still exciting and in keeping with the character's continuity, which I've worked so hard to maintain all these years."

These days, Wyle echoes the hard-won maturity of the character he plays. He is married to Tracy, a former makeup artist; as the father of 18-month-old Owen, he embraces parenthood: "I've never smiled wider, felt happier, and -- when I imagine what could take those feelings away -- never felt so vulnerable."