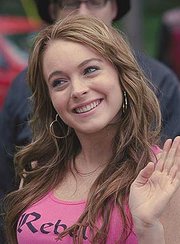 Last week I blasted the crowd-pleasing hit movie "13 Going on 30" for being little more than a remake of "Big." As luck would have it, this week we have another derivative teen-lesson movie. The difference between the two, however, is alarming. While "13 Going on 30" offers no insight or new ideas, "Mean Girls" actually carves its own identity from the source material.

One of "Mean Girls'" obvious influences is the blackest of all teen comedies, 1989's superb "Heathers." Another, credited source is "Queen Bees and Wannabees," a book by Rosalind Wiseman for parents to help young girls survive cliques and modern high school life.

"Saturday Night Live's" Weekend Update co-anchor/writer Tina Fey (who also appears in the movie as teacher Ms. Norbury) penned the screenplay, a bright concoction that seems to have drawn from personal experience.

In any cautionary youth tale, it's good to have the main character be a new student. That way the audience can learn about the new school along with the character. In the case of "Mean Girls," that premise is taken to an extreme. Cady Heron (Lindsey Lohan) isn't just the "new girl." She's actually been home-schooled by her parents and living in Africa until she was sixteen! Part of the kick-start "Mean Girls" gets right from the outset is watching Cady experience the petty, mean-spirited world of high school at her age, having never even been to one before.

Fey also gets mileage out of the Africa joke in two very funny scenes where the high schoolers seem to become, in their behavior at least, ravenous jungle beasts. All of the falsehoods that mask their more salacious intentions fall away, and they are left stalking and howling at their prey.

"SNL" head writer Tina Fey pens a scathing comedy about the cruel hierarchy known as high school. Lindsay Lohan stars as a naive girl who enters public school and is soon befriended -- then at war -- with the elite gals. An array of great supporting characters and quotable barbs separate this teen flick from the crowd.

Cady meets Janis (Lizzy Cuplan) and Damian (Daniel Franzese), two misfits who seem to have her best interests at heart. Janis has the dreaded stigma that everyone thinks she is a lesbian and, in one of the movie's many jokes for older audiences, her last name turns out to be Ian. Of course Janis is an artist, and she draws Lindsey a map of the cafeteria with all of the tables separated into each specific clique (plastics, burnouts, jocks, band geeks, band geeks who make out). Moments like this that hit uncomfortably close to the truth are what set "Mean Girls" apart from other teen comedies.

Everybody uses somebody in the insecure world of teenage drama, so its no surprise that Janis and Damian also have plans for Cady. She goes undercover and becomes one of the popular girls to infiltrate, divide, and ultimately ruin them. But, as Lord Acton wrote to Bishop Mandell Creighton back in 1887, "Power tends to corrupt, and absolute power corrupts absolutely." Can Cady avoid becoming a plastic herself?

There was one particular choice in Fey's script that was very refreshing. It is obvious from the moment we see her that Cady is good-looking. In a lesser movie, however, the actress playing her would be an ugly duckling, all dressed-down and frumpy, probably with glasses. That way, when she "cleans up," it would be a shocking revelation to see how beautiful she can be. "Mean Girls" recognizes that some people are born with looks, others aren't, and it's how you act around others that determine whether you are a good person or not.

"Mean Girls" doesn't have nearly the amount of venom that "Heathers" did, and although some plot elements are fairly outlandish, it still manages to be believable. Much of the credit for navigating the delicate balancing act between parody and reality must be given to director Mark S. Waters ("Freaky Friday," "The House of Yes"). And Lohan, whom Waters directed in "Freaky Friday," is a likable lead, even when her character steers off course briefly in the movie. Props are due to Tina Fey for being the first cast member since Mike Myers in "Wayne's World" to survive her movie being produced by "Saturday Night Live" boss Lorne Michaels -- and not also have her movie completely suck.