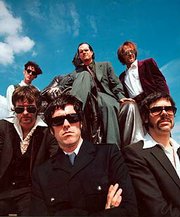 Dick Valentine hates the name of his band. That's to be expected, though, because a lot of things are making Dick mad these days. Like the full-body rash that has turned him into a vicious man-wolf. Or his inability to find a steady horn section. Or Ronald Reagan.

The lead singer and guru of Electric Six has been traversing the country in support of his Detroit band's latest album "Fire," which came out last year on London's XL Recordings (also home to The White Stripes, Badly Drawn Boy and a bunch of other cool bands). Electric Six's seizure-inducing sound has been dubbed "punk," "new wave," "disco," "arena rock" and lots of other nasty names by the press, but XL prefers to refer to the band simply as "the total entertainment solution."

As you might expect from a man who penned such gems as "Gay Bar," Valentine has a way with words and uses every opportunity to do just that ("Give my number to everyone you know and have them call me. I love getting phone calls," he urged at one point in the interview). What's less clear is how much he likes telling the truth...

lawrence.com :: How'd you get your name?

I think I wanted to cultivate a sort of 1930s crooner-from-Brooklyn kind of image ... like leading the big band, you know? (Imitates radio voice): "Dick Valentine and His Pack of Heroin-Addicted Horn Players," on KCBS, comin' at ya" ...Kind of like that ultra-hip, swingin' cat kind of thing. And I've come up way short.

Is your horn section heroin-addicted?

We don't actually have a horn section and that's part of the reason that I've come up short. It's not as easy as you'd think to find a horn section.

Do you have any favorite horn sections of all-time?

Um, great horn sections ... I don't know what you're talking about.

Most people probably don't have a favorite horn section...I just thought I would ask.

Yeah, you gotta get down and dirty and get the cold, hard factoids.

You know how you watch CNN and like now everything's reduced to just a factoid? Like it's not even a fact anymore; it's a factoid.

Could you give me some factoids about Electric Six?

You don't know anything about your band.

I don't know anything about my own band. I don't travel with them; I rarely speak to them; I have some idea what their names might be.

Is that true? You travel separately?

I do, I drive in a sidecar. I'm like the little chimpanzee that they never had. Yeah, no, I ripped a page out of Michael Jackson's playbook, you know, like Sheryl Crow used to be his backup singer and in all her interviews that she does she's like she couldn't believe Michael Jackson never talked to her and she's never going to treat her backup singers like that. She takes time to get to know each and every one of them and send them a Christmas card. I think that's just stupid. Why would you take the time to do that?

I don't know if Michael Jackson is the right playbook to go to.

Alright, well ... wow, so far I haven't had to ask any of my questions.

Oh yeah, you can take as much time as you want. I'm just sitting here in my sidecar.

(Omitted herein is some inconsequential banter about where the band is playing next, which bleeds into a conversation about Lawrence.)

I enjoy Lawrence. You can get a heck of a carrot juice there.

Yeah, right near (The Bottleneck) there's a wicked juice bar.

Do you prefer carrot juice to liquor while on tour?

Yeah. You know how they say that if you drink like 16 glasses of carrot juice a day your skin will turn orange?

That's what I'm going for.

(laughter) How close is it? What hue?

Well, you can't see what color my skin is right now underneath the rash. When the rash clears up I'm hoping it'll be orange.

Did you stumble into some poison ivy or something?

I don't know what her name was. I didn't ask if her name was Poison Ivy or not... It's true what they say on the road -- don't leave home without the aloe. I got into this business thinking I was going to improve my social standing and now I'm just a big bucket of pus.

This is incredible -- the guy who was supposed to be doing the interview is at home with a full-body rash.

I shit you not.

No, he really has a full-body rash?

Yeah, he really does. Maybe you could talk to him about it.

Have him come to our show in Lawrence and we can aloe each other up.

My questions are boring compared to this interview so far...

No, you're doing great.

I appreciate it. Let's see ... tell me one thing that annoys you most about your band.

The name. I still can't believe I'm in a band called 'Electric Six'.

Was it your choice to name it that?

No, it wasn't. When we got our record bunch we had to change our name. We were called the Wildbunch for five years and then we got a record deal and they were like you can't be the Wildbunch, there's already a Wildbunch. We all came up with different names and nobody could agree on anything and Electric Six is the name that everybody hated the least -- the one name where nobody would quit. It still sucks.

What should people expect from your stage show?

They should expect to see six men in their early 30s dealing with midlife crisis issues. We all have mismanaged our finances horribly, and you can see it in our music.

So this is mostly a way to get your way out of debt, or what?

We're rocking our way out of debt.

Any other midlife crises besides financial ones?

There's a lot of sexual innuendo as well.

I've never been afraid of sex. I've always said that self-expression through sex is really the purest form of flattery.

Did you come up with that yourself?

And you believe that, huh?

Well, I'm doing a lot of talking out my ass because my mouth is swollen shut from the rash.