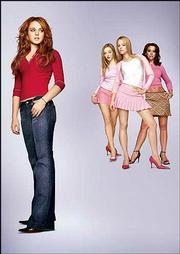 Lindsay Lohan, left, portrays a home-schooled teen cast into a public high school who must deal with a power-hungry clique (Amanda Seyfried, Rachel McAdams and Lacey Chabert at right) in "Mean Girls."

Kansas City, Mo. — The high school experience is often characterized by the clique to which one belongs.

In the edgy new comedy "Mean Girls," students occupy an intricate and cruel hierarchy, divided into roles with names such as the Queen Bee, the Target, the Banker, the Torn Bystander and the Floater. It's a constantly shifting world of predators and prey.

Waters' scathingly insightful film is the story of one such comeuppance and the repercussions it has within a suburban Chicago high school.

Lindsay Lohan portrays a home-schooled teen named Cady who enters a public institution for the first time. First falling in with a pair of outcasts, she is soon drawn into the world of the Plastics -- three elitist girls who are at the highest level of the social pecking order. After Cady is adopted by the Plastics, she initially uses her position as a secret agent to undermine the group. But then she starts to become comfortable with her newfound standing.

"There's an unusual reaction but not an uncommon reaction from the teenage girls who see the movie: They watch it less like a straightforward teen comedy and more like a horror movie. You hear just as many audible gasps as laughs," says the director, speaking from the Fairmont Hotel while in town to promote the project.

While the picture is a comedy on its surface, it hits plenty of raw nerves in terms of revealing the complexities involved with surviving the halls, classrooms and locker rooms of teenage life. Many of the characters -- such as Plastics leader Regina (played by Rachel McAdams) -- are positively Machiavellian in their conniving ploys to retain and enforce power.

Emmy winner Tina Fey, head writer of "Saturday Night Live," based her debut screenplay on the book "Queen Bees and Wannabes: Helping Your Daughter Survive Cliques, Gossip, Boyfriends and Other Realities of Adolescence."

"The great thing about the mean girls -- the girls who are considered the popular girls in school -- nobody readily acknowledges that they're mean in public," Waters explains. "Instead, they're who all the other girls kind of want to be friends with and want to be in the glow (of) their light. And all the guys want to go out with them. But underneath, the power that is given these girls is wielded carelessly. So even though these girls want to be their friends, they're secretly scared of them and hate them."

Waters' own high school experience was characterized by being both a member of the varsity basketball and tennis teams but also on the mathletes and debate squads.

"SNL" head writer Tina Fey pens a scathing comedy about the cruel hierarchy known as high school. Lindsay Lohan stars as a naive girl who enters public school and is soon befriended -- then at war -- with the elite gals. An array of great supporting characters and quotable barbs separate this teen flick from the crowd.

The American Film Institute graduate became familiar working within the teen genre when directing last year's "Freaky Friday" remake that went on to make more than $100 million at the box office.

Any fear that he'll be stereotyped as the director who only does teen girl-oriented comedies?

"Not really, because there's no way I'm doing another one," Waters says, laughing.

"Certainly after 'Freaky Friday,' it wasn't like I was going, 'I must do another teen comedy with Lindsay Lohan.' But when Tina's script came across my desk, it was impossible to pass up because it was the funniest script I'd read in years."

With its mean-spirited spin on female high school rivalry, the movie will inevitably draw comparisons to the 1989 dark comedy "Heathers." This connection is even more intriguing when considering "Heathers" was written by Waters' brother Daniel. The director hopes the influence won't be too noticeable.

"It was something we were trying to make sure was separate and distinct," he says. "Obviously, we don't have all the killing and mock suicides that 'Heathers' did. One of the things I like to joke with my brother about is that it's kind of an easy way out to just kill your bullies."

(Both brothers are planning to collaborate on an adaptation of the novel "The Dice Man," about a drifter who makes all his decisions by a roll of the dice.)

Waters hopes older audiences won't be discouraged from seeing "Mean Girls" because they might think it is just standard teeny-bopper fare. He believes its social themes ring familiar with anyone who has ever attended a public school.

"Whereas the 'Heathers' world view is fairly bleak, I wanted people to realize that there is hopefulness at the end," he says. "The great thing about high school is that it's survivable; it's finite. And when you reach the end of it you can look back and laugh at what used to be important to you and how you used to behave."