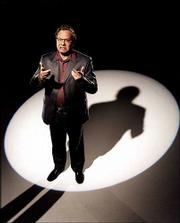 Indignant, frustrated, sarcastic, bitter. Lewis Black has established a persona within pop culture as a foaming, cantankerous ranter whose onstage behavior must only narrowly be keeping an aneurysm at bay.

But is he really this intense?

"I am pretty relaxed the rest of the day," Black admits in a recent phone interview from California.

While he has appeared in feature films such as "Hannah and Her Sisters" and "Jacob's Ladder" and has authored more than 40 plays, the performer is best known for his "Back in Black" segment on Comedy Central's "The Daily Show." The weekly soapbox allows Black to spout about the topic du jour -- a gig that's helped earn him the title "America's foremost commentator on everything."

The Maryland native will move from the TV screen to the stage this Sunday when he delivers two shows at Liberty Hall, 642 Mass. Audiences can depend on his "Rules of Enragement" tour to be rife with humor built around social and political themes. Don't expect any routines about family vacations or airline food. His material is designed to provoke ... but in a healthy way.

I force the reaction of laughter.

What can we expect from your live show on this tour?

Expect some discussion of Janet Jackson's breast, because I think that's a pivotal point in American history. It's kind of like in the same way you'll remember where you were when Kennedy (was assassinated) or The Challenger blew up.

I've never seen this country act that immature. I was astonished. I thought it was unbelievable the reaction people had to this breast being exposed -- which wasn't exposed long enough for anyone to see anything ... By the time you said the word "breast" it had disappeared. Why would you treat it any other way than it's like high school and two people did a stupid prank, and move on? All of the sudden you have to stop and legislate decency again? Please. It's as if we find it impossible in this country to achieve any level of maturity.

Have you ever injured yourself on stage because you've gotten so angry?

Once I blew my voice out way early on. Then one time I gave myself a stiff neck. But the only thing that's really happened is at times I'll rip my glasses off for effect, and they break and are flown off into the audience.

What else has made you particularly enraged lately?

The idea of a constitutional amendment of what marriage is. The whole thing over gay and lesbian marriage. I just find inconceivable that this really upsets people in light of everything that's happened. "Oh, we're worried about terrorism, but THIS is just as terrifying." It's not. It's stupid because you allowed them to adopt. If you wanted to have the argument, that's where you have the argument. Then you might say, "I don't know that it's good for a child." But to sit there and tell me because the Bible says something -- you can't tell me that. We have a separation of church and state. It's part of the Tough (Expletive) laws.

You have to remember too that the Bible was written at a time when these guys would come out of the desert with a camel they wanted to marry. So you had to have somebody go, "You can't marry a camel; you have to marry a woman." I think they had to have the laws to keep people on track.

You're billed as America's foremost commentator on everything. Who had that title before you came along?

Given your theatrical background, do people accuse you of playing a character when you perform?

I think they understand that I am performing. I have to say that's what it kind of is. If that was me all the time I'd be dead.

How does an artist avoid falling victim to self-parody?

Boy is that a good question. I wish you hadn't asked it. I know for myself a lot of it becomes I don't have to yell all the time anymore. You try to find shadings that will make your character have more notes. It's why I've been offered radio, and I can't really see myself doing it, because I'm afraid I would cannibalize myself.

Or develop a Vicodin habit? 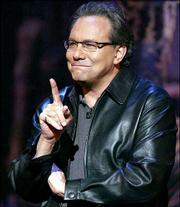 "The Daily Show" has become the primary source of news for a lot of people. Is that a good thing?

A lot of it is people complain that this is where kids are getting their news. But I think, "What kind of memory do these people have? When were kids EVER watching the news?" ... Part of it is because you have a cable system that is pouring out four major news channel that's 96 hours of news a day, plus the main news shows shown every night. How much news can you have in a day? It creates a wall of sound, and it's hard for people to know what to focus on. We're like a Cliff's Notes. In some ways I think we're good because we give people -- especially young people -- a way in which to look at news and not take it so seriously.

Will you ever get your own TV show?

I just did a pilot for ABC called "Educating Lewis." I think over time it could be really good, because the first one you can't do a lot. But we had a really nice plot about a teacher who hugs a student, and there's a zero tolerance policy for hugging. It's funny and it's got a sweet side -- which I think people who like me will be a little disappointed. As it grows it would be a little less sweet and have a little more edge.

Just keep doing it. There are two things I was told. A friend of mine said, "Comedy is simply tension and release." That's something I eventually came to understand after about 15 years of banging my head against a brick wall. The other is just do it. Then you do it again and do it again.

So by implication you get a lot of release from your tense performances?