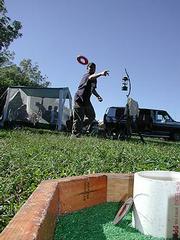 Geoff Cox plays washers at the Walnut Valley Festival last fall. Cox has played washers since a classmate at KU's architecture school introduced him to the game.

There's more than one way to tell a serious washer player.

Another good clue is the wear and tear on the washer paraphernalia. Dents and paint chips are the calling card of the washer junkie, battle prizes to be flaunted like the Urak-Hai army catapulting severed heads into Minas Tirith.

And then there's the throwing technique.

"I do a controlled Frisbee," said Mark Wilson, a Lawrence-based attorney and washer enthusiast. "I try to reduce the amount of lateral movement in the arm."

If none of this makes sense to you, welcome to the world of washers. The lazy-day lawn game -- often derided as a "poor-man's horseshoes" -- owns the unique distinction of crossing cultural and economic divides. Hippies, rednecks, yuppies, soccer moms -- all are players of this "great American game." 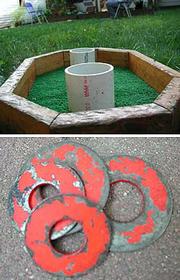 Above, a typical 2-hole PVC washers target. Below, a set of washers with high-visibility paint for low-light games.

"It's sort of like an underground activity; about as many people know about it as don't," Wilson said. "It's such a game of style. Since it hasn't been on television and people didn't grow up watching others play it, everyone comes up with their own twist."

Ringers
Though variations in scoring and setup abound, the basic premise of the game is consistent: get some washers and make some holes and try to throw the washers in the holes. Like horseshoes, washers is a game of proximity. In the hole is best; closet to the hole is the next best.

"You can build it however you want," Wilson said. "That's part of the fun of it. You can build your own set and take pride in having something a little different."

Wilson's setup -- two square boxes with PVC pipes in the middle -- is probably the most common, but another popular design features a hole cut out of an inclined board. Other versions sport two or more holes of varying sizes, and some sets use carpet or sand to cushion the bounce.

Chris Reed, who plays washers with Wilson, said he's played on all types of sets, from "low-rent" coffee-can sets to custom plastic-molded jobs.

"(Some of them) just totally screw-up your game but that's what they have at that house and you kind of have to respect that," said Reed, whose wife Christine graduated from KU in 1997. "I would almost have to refuse to play with a three-piper, though, 'cause to me that's just not how washers are."

Lawrence housemates Chris Williams and Steve Hammond play a backyard version that features two inclined boards about 15 feet apart with a three-inch hole in the middle. The boards -- separated by a dirt pit and adjacent to an overgrown garden -- are scarred by nearly a year's worth of pitching marks.

"There's some shit-talking, but it's friendly competitive," said Hammond, who sings and plays guitar for local thrash rockers Filthy Jim. "I can shoot one round completely shitty and the next one hit a bunch of ringers ... it improves the more I drink."

Williams found the game to be a popular attraction last September at the Walnut Valley Festival in Winfield, where he helped organize an all-day tournament.

"If you've ever heard any of the stage seven recordings there's a lot of clinking," he said. "We're thinking of revising next year for the loud factor."

In the beginning
Rumors abound on the origin of washers. One theory says the game dates back to the days of the pioneers, when cowboys would take the wheels off their covered wagons and pitch washers (or whatever was handy) into the hub of the wheel for entertainment.

A more popular and generally accepted theory, however, is that the game was developed by hard-working rural people with few resources available for recreation -- a theory supported by lifetime player John Flora. 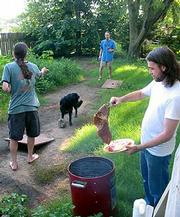 At right, Steve Hammond, vocalist/guitarist for the Lawrence band Filthy Jim, prepares dinner while his roommates play washers with inclined board and hole targets.

"We were poor people and washers was one of the cheapest games we could play," said the 56-year-old Flora, who uses the internet from his home in Illinois to organize tournaments for players from a five-state area. "We'd find four washers laying around that were kind of the same size and then dig two holes and pitch 'em back and forth."

Flora's front yard contains to this day what could be considered the archetypal washer setup: two holes dug about 20 feet apart.

"I keep about a two-foot circle around 'em weed-eated," he said. "When I get too old to stoop down I've got a magnet on the end of a pen-like thing and it stretches out about three feet ... I got it at an auction for a dollar."

While Flora enjoys the competitive aspect of competing in tournaments, most players are simply backyard hobbyists. Lawrence couple Dylan and Kay Bassett decided to build a set after playing at a friend's barbecue. 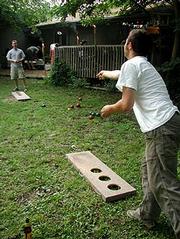 "It's hard to find something that appeals to all age groups," said Kay, who plays frequently with her sons Miles, 10, and Kade, 5. "I'm not real athletic so finding
something like that that we could do together was a lot of fun."

Barbecue seems to be a reoccurring theme amongst washer players, as KU senior Rory Flynn can attest.

"Barbecue and washers go pretty much hand-in-hand, and definitely some beers," Flynn said. "We've adapted a few new rules after a couple."

D.I.Y. or else
While most serious washer players build their own sets, a number of mom-and-pop manufacturers sell sets online (neither Wal-Mart nor Target carry prefab sets, nor any local sporting goods retailers).

Basic washer-and-cup sets start at around $10, while more extravagant sets can fetch up to $100. Some companies even offer specialty washers with sports logos, painted designs and phrases like "determination" and "achieve." 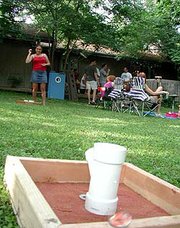 Washer organizations or leagues are rare since the game is most commonly played informally in backyards and at friendly gatherings. Though tournaments are frequently organized in the St. Louis area, Lawrence presently has no visible organization or tournament.

If there ever was one, it's a good bet Mark Wilson would be there.

armadillowashers.com
letspitchwashers.com
thewasherboardco.com
bombatwashers.com
ultimatewashers.com
usawashers.com
washeroos.com
missouriwasherworks.com
(Note: Buying a pre-fab washers set is absurd, as the game surely came about thanks to the ready availability of the equipment. As a self-respecting reader of this DIY rag, no doubt you'll make your own. -ed)

Washers Rules
There are likely as many versions of washers as there are players of the game. Indeed, veteran players say the variety of rules and styles of game set-ups just makes the game that much more 'special.'

For your convenience, we've typed up our favorite washers variation, herein humbly dubbed the Kaw Association of Washers Official Rules, 2004.

Printer-friendly washers rules in PDF format or in Word Document format for your convenience.

EQUIPMENT
KAW washers is intended for play with a one- or two-PVC target and four washers.

GOAL
Achieve eleven points, not surpassing eleven nor stopping at ten unless then proceeding to eleven. Busting applies; see "Bust" in SCORING section of official KAW rules. Game sequence is similar to that of baseball, where one player is designated 'home' and the other 'visitor.' The home player is determined by a toss-off or is the victor from the preceding game; before commencing the game, home player shall determine which point permutations (if any, see below) apply.

The visitor shall start the game by throwing all four washers. The home player shall follow in turn, and always have a bottom-of-the-inning chance to tie or win the game (that is, where the visitor has achieved eleven points in the preceding half inning). Where both players achieve eleven points in the same inning, sudden-death extra innings shall commence.

SCORING
One point in box; five points in (smaller) PVC; two points in larger PVC pipe (if applicable). Negative points are possible (as will become clear).

Dryer Sheet: Where a player scores with each and all four washers, a 'dryer sheet' is said to have occurred. A point shall be subtracted in all cases from the other player's score. A dryer sheet also trumps a bust (see below).

Additional point permutations -- all optional, as designated before the game by the home player:
Leaners: After all washers have been tossed, any and all washers determined by both parties to be at rest upon an incline, that is leaning, will affect the awardence of two additional points to its tosser. Thus, single leaner is worth three points.

Humpers: After all washers have been tossed, any and all washers determined by both parties to be at rest on top of one another, that is humping, will affect the awardence of one additional point to its tosser. Thus, a standard humper is worth three points. A menage a trois humper is worth five points. An orgy, that is to say all four washers are getting' freaky hardcore-style, bequeaths upon its hallowed tosser three additional points for a total of seven hot points. A mother humper, that is a humper outside the scoring area (in the grass, for example), is worth negative one point. All other humping rules also apply in the negative outside the scoring area.

(Several combinations of above permutations are possible. For example: a humper-leaner, that is two leaners at rest atop each other, is worth seven points. Neither humpers nor leaners apply inside the PVC scoring area.)

Taken to the cleaners: Where a washer lands balancing on the target ledge or atop a PVC, the tosser immediately wins, regardless of whether he or she is home or visitor.

Wash Out: The bane of a tosser's existence is being washed out. The cruel reality is that when nary a point is scored with all four washers, yet another point is then taken away. Wash out victims are punished one point.

John Brown rules: This combative permutation fosters both an alert game and ever-present hope for a player being crushed hitherto by the competition. Two instances of combat apply, both resulting in 'bust' for the appropriate player. The first results in the tosser busting where he or she tosses a washer, missing the target completely and subsequently hitting the opponent on the fly. The second instance results in the opponent busting, where the tosser's washer hits the target, ricocheting and hitting the opponent before touching the ground. Players may or may not choose to designate a box, similar to that of baseball's batters box in, where in the opponent must remain until the tosser releases each washer. Tradition holds that each player shall retain a standard-issue King James Bible in their pocket during play and that the loser shall hang.