'Lord of Rings,' 'Gatsby' among most reread books

Lisa Clemmer, a 37-year-old bibliophile from Richmond, Va., remembers the first time she read Alice Walker's "The Color Purple." She was in college, at Virginia Commonwealth University, and Walker's novel introduced her to a world she knew nothing about.

"The Color Purple" proved so transformative that Clemmer has read it four times.

"I like to go back just to reinvigorate that feeling. I get all tingly from it. It moves me to a different time and place," says Clemmer, who just a year ago last read Walker's Pulitzer Prize-winning story of blacks in rural, segregated Georgia.

Clemmer's taste is not unique. According to a study by the American Library Assn., "The Color Purple" ranks among the fiction most commonly reread. Others include the Harry Potter books, the "Lord of the Rings" trilogy, Jane Austen's "Pride and Prejudice" and Shakespeare's plays.

"I think books that get reread have characters or scenes or lessons that people want to go back to again and again," says Neal Wyatt, the head of an ad hoc ALA committee that analyzed what books are reread.

"Some books need repetitive readings just to feel like you got it. And sometimes it's not even fair to say the books are reread, because you're a different person each time you read them," Wyatt said.

Also cited by the committee: F. Scott Fitzgerald's "The Great Gatsby," Harper Lee's "To Kill a Mockingbird," Laura Ingalls Wilder's "Little House on the Prairie," Charles Dickens' "A Christmas Carol" and A.A. Milne's "Winnie the Pooh." The ALA committee was composed of both librarians and editors with the trade publications Library Journal and Booklist. 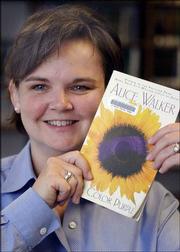 Lisa Clemmer holds a copy of "The Color Purple" by Alice Waliker at her office in Richmond, Va. She has read it four times. According to a study by the American Library Assn., "The Color Purple" ranks among the fiction most commonly reread.

The findings were not ranked and were based both on the committee members' personal opinions and those of library patrons. Only novels, plays and short stories were considered; panel officials said the Bible and the Quran likely were the most reread texts in the world.

The ALA selections all share one quality: They were encountered in youth, whether assigned in school, read to by a parent or discovered on one's own. But favorite works are revisited for various reasons. "A Christmas Carol" is a holiday classic, while the summertime setting of "Gatsby" makes it an ideal beach read. One committee member, Joyce Saricks, says that the frequent staging of Shakespeare's plays inevitably leads to rereadings of the texts.

"I get a lot of people who tell me that they're going to see a production of 'King Lear' and they want to read the play. And then after they see the production, they might reread the play again," Saricks says.