The most outstanding graphical presentation in recent memory can't make up for archaic gameplay.

The dust is settling. The hype machine has finally passed its climax and those critics who didn't rush their reviews out during this time period finally have their say. 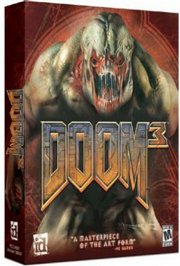 I, like some of you, received my copy of Doom 3 on release day and raced home with a child-like anticipation. Of course, this is especially weird for me since I was in no way, shape or form a fan of the original run-n-gun shooter. I was so overcome with excitement due to the depth of feeling the hardcore fans have for the series and the presumed second coming of graphical technology. After devouring Doom 3, I am slightly disappointed to report that the gorgeous shell hardly makes up for its antiquated gameplay.

The best way to describe Doom 3 is that it's like an uber-detailed haunted house, with heavily scripted scares that are usually, but not always, predictable. It's scary until you figure out the basic pattern. Of course, when you enter a pitch black corridor, saturated with eerie noises, the feeling of not knowing what's coming is much more terrifying than the baddies that actually arise out of the darkness. And yes, surround sound and high volume is a must to get what's intended from the experience.

Enter problems. Once you are faced with numerous enemies, it's a very rare occasion that you get to appreciate the enemy for what it is and can do, because you are so inundated from all sides that you have to shoot quickly or die. Not only that but even though most enemies have a few things they can do, there is no personality attached to them. Moreover, there is no complex AI routine to make up for it. Most (save for a couple enemies taking cover) of the situations call for every enemy to be drawn to you like a magnet, shooting, clawing and/or creeping with whatever damage they can inflict. Although this may be seen as "faithful" to the Doom generation, it's nothing more than outdated and somewhat lazy. It's like if they re-released the Model T with a new look but only made its top speed 20 mph and not above 100 like most vehicles today.

Of course, Doom 3 is nothing more than a modified retelling of its genesis. So let's say I won't hold the lack of personalities and complex AI against it. There are less cerebral shooters out there that prove to be more fun, like Painkiller, for instance. Why? Painkiller had an awesome physics engine to support its mindless meanderings. Moreover, it had creative weapons that were really fun to play with.

Doom 3's physics are pretty unrefined, paling in comparison to the graphical leap it took. The weapons are definitely one of the most disappointing aspects of Doom 3. Few of them pack any real punch after the first few levels. Not only that, but the sound effects are really anemic and don't support the firepower. The shotgun, BFG and rocket launcher's sounds really don't match the intensity of the actual gun. Everything sounds pretty thin, unless you are using the plasma rifle, which is, by far, my favorite weapon and arguably the best in the game. But please tell me why the flashlight has to be used alone. Is there no way to hold a gun at the same time? No masking tape in the future to attach it to a weapon?

Okay, on to the good. Yes, the game looks incredible. Not only do the detailed textures and enemy models set a new standard, but the sheer amount of objects and items drawn in one screen are incredible. There isn't just a staircase and a floor; there is a rusted railing with debris from someone's work, detailed and interactive interfaces with computers and access doors. There was as much time creating the wear and tear as there was creating the levels. The amount of weathering really makes the underground Mars labs look and feel like dingy, depressing places. Right when the art direction starts to get sort of beautifully monotonous, the levels start to change bit by bit as you get closer to the demonic home.

Fleshy, slimy tentacles just appear and leap off the screen with a disgusting realism. Once deeper into the game and out of the labs, it's straight up a colorful wonderland of demonically epic proportion. The boss models are a ton of fun to look at and are pretty ominous. Despite the lack of intelligence, the "awe" effect is pretty prominent.

You uncover bits and pieces of the story through voice memos and e-mails from PDAs you find from their dead human counterparts. Many of these PDAs have codes in them to unlock safes, which are necessary if you want to stock up on ammo in empty areas. Also encoded on many PDAs is a particular security access that you need in order to go on to the next part of the level. This gameplay aspect happens often and gets old real quick. If it wasn't for the unfolding of the story through the PDAs, I would've completely done away with the whole concept. There are also a few puzzles in the game that don't really challenge you, but are a nice diversion from the "point, shoot, repeat" process.

Aside from the anorexic weapon sounds, the environmental soundscapes are amazing. The music is really top notch. The voice acting is very good and the surround mixing is perfect.

The multiplayer component is really bare, but that's on purpose. The game was created for the single player experience. The modding community will surely embrace it so we should have some interesting things to look forward to.

I have no doubt that developer id made exactly what they intended...a game for the Doom fans. But that doesn't give it the right to be invisible to current standards of gameplay. I am shocked to see many reputable publications have their final score weigh so heavily on presentation and graphics (some admittedly so). Some may argue that I "don't get it" or I'd appreciate it more if I was a Doom fan. Hmm. I am not an Unreal fan. But I believe UT2004 is one of the best online multiplayer games with its gameplay additions like the Onslaught gametype. Gameplay. Gameplay. Gameplay. A game can not live by graphics alone.