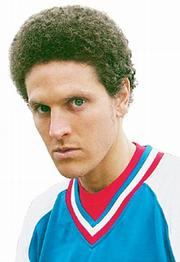 Scott Novosel, a Kansas University men's basketball walk-on during the 1994-95 season, has become a rap star in his new home, Japan, with his group, niceguyjin.

Without benefit of accompaniment or background beats, Scott Novosel raps willingly before an audience of one.

"How's that?" the 31-year-old former KU basketball guard said with a laugh after performing his hip/hop hit single "Onsen" in Japanese.

Novosel, whose other single "HAI IRASSHAI!" has sold more than 20,000 copies in his new hometown of Tokyo and is the theme song of a Japanese TV show, might be emerging as an international rival for Eminem. His group, niceguyjin, will release its first full-length, 20-song album in October.

"It did well," Novosel said of the tune "Onsen," the theme song for a Konami video game in which an embarrassed young American man -- clad only in a dishrag-size towel -- scurries from a locker room to a natural hot spring where both men and women are bathing.

"We were on this TV show -- the equivalent of 'Oprah' or the 'Tonight Show' -- with a viewership of 20 million," Novosel said. "After we performed on there we were recognized a lot more in public. It's hard not to notice us."

Novosel wears his hair in an expansive brown Afro. His brother, J., sports a white Afro, and the group's third member, Dave Olsen (Dave O.), has yellow hair and a black goatee.

Novosel has fit a lot onto his plate since playing 15 games for KU as a walk-on during the 1994-95 season.

Novosel, who has lived in Japan for four years, first headed to the Land of the Rising Sun in 1999. He went to visit his brother, who had a strong desire to live overseas after studying Eastern Civilization at KU, and to watch an NBA exhibition game in Japan involving former KU teammate Scot Pollard.

"While I was there, I was going to go to the Tokyo Film Festival," said Novosel, who hoped to speak with producers about his movie script for "Fieldhouse", a yet-to-be filmed flick that tells Novosel's life story. The script details a young man who fulfills a dream by making the roster of the powerhouse Jayhawks.

"While I was there, I got offered a job to run a basketball program. I said to myself, 'I can make money, save some money to put in my film,''' said Novosel, who for several years has been trying to interest investors in his project. "I worked basketball camps and did some work as a personal trainer and taught things like golf, too."

Golf is a family passion. Novosel's dad, John, recently invented a new way to teach the game called "tour tempo" that has been endorsed by several professionals. While teaching various sports, Scott quickly made friends in Japan while living with his brother, who had inked a contract with a major recording label in Tokyo.

"Back in Tokyo, if you are an American boy, you can do commercials," Novosel said. "My last commercial went national. It was a big one. I got fan mail from it."

That commercial was for Suzuki.

"I'm playing this flower-shop guy," Novosel said, "and a cute girl comes up and asks for flowers. I say, 'There's no way they can fit in your car. Your car is very small.' I fill it up with flowers and say, 'You can fit stuff in there.'"

"Scottie is great. You might call him eccentric,'' said Greg Gurley, a KU teammate of Novosel who has known the 6-foot, 175-pound former Blue Valley North player since the two were in fifth grade. "We all get e-mails from him and they are always strange. That's Scottie. Whenever we ask him what he's doing, he has about 19 jobs."

Music notwithstanding, Novosel's major goal is to make that movie.

"It could be in theaters, it could be HBO. I want to just get it made," Novosel said. "If I can't get a distributor I'd go through video. I'd get in a van and stop in every city in Kansas trying to sell the movie."

All Novosel needs are investors, and he's as easy to reach as sending an e-mail to snovosel@hotmail.com.

"We'd like to get two name actors," he said. "We have commitments from several of my former teammates. They'd do cameos. It's a great story, a true story of a kid with a dream. It's about a family of dreamers who have a kid, Scottie, who walks on to play for his dream team, Kansas."

Novosel as a Jayhawk...Scott Novosel was a Kansas University men's basketball walk-on during the 1994-95 season. His statistics:

Then, if the movie is released, he would like to make more.

"I want it to be a trilogy," Novosel said. "Fieldhouse is No. 1; then Tokyodome, a story of what we're doing in Tokyo, and No. 3 about my dad, called 'Pebble Beach.'"

The movies can be derailed if Novosel becomes the next Snoop Dogg when the album is released in October. Basically, the album contains music composed by his brother with beats from traditional Japanese instruments.

"We're trying to make history out there, dude," Novosel said.