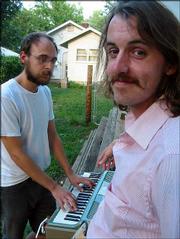 More than likely, everything Drakkar Sauna says is a lie.

If it isn't, you'll sure as heck think it is. Band members Wallace Cochran and Jeff Stolz spin cock-and-bull stories like they're outcasts from some Mark Twain Academy, only they're a little under-rehearsed.

For instance, the account of how Drakkar Sauna started:

"I was in my bathroom and I heard the heavens open up and this angelic voice came down. I came out and it was (Wallace)," says Stolz, who plays guitar, harmophone, farfisa, mandolin, kick drum, tambourine shoe and various "devices of rattle."

Or the explanation of the origin of the song "Groovebox-76."

Stolz: "It's about despair."

Stolz: "Despair as a result of impotence."

These are the plots that inspire the duo's peculiar debut album "Rover," a 12-song affair with titles like "How to Approach an Accident Victim" and "Song of Serious Injury." Recorded at home and released independently, the album reflects the group's diverse influences -- Mandy Patinkin, Richard Dyer-Bennett, the musical "Guys and Dolls," The Louvin Brothers, The Harry Smith Anthology of Folk Music -- and ultimately leaves the impression that these are two very strange fellows.

Spearing bears
"A rover is like a bounder, a cad," explains Cochran, a guitarist and secondary rattler of devices. "He's got a nice moustache and he knows how to tie several different ties."

In Cochran's case, he also knows recipes for homemade bug spray (three cups of catnip and a quart of vinegar) and words like "Pentateuch," which alludes to the first five books of the Hebrew Scriptures.

Drakkar Sauna's "Pentateuch" describes the first five songs on the group's album -- a thread titled "Very Much Alone" that is loosely bound by themes of heartbreak and impotence, Cochran explains.

A more tangible sequence, perhaps, comes later in the album during the "Coalition Bear Force" trilogy, composed of the songs "Spear for When the Bear Comes," "Seduction Turns Deadly" and "O, God, I Have a Canoe."

"We were worried about bears because we were in Colorado and it was forest-fire season," Cochran explains. "So Jeff collects this spear. We argued for awhile about whether it was a spear for when the bear comes or for when the bears come."

"I think Jeff pointed out that either way we were going to need one. And I thought that was true."

Old-timey tunes
The band's sound could best be described as old-time country, but with much of the exotic weirdness and mystery that characterizes Alan Lomax's field recordings or the Harry Smith Anthology. The band's three-prong attack has been narrowed down to two since upright bassist Chris Kuhlman skipped town, but the music still falls within the old-timey realm.

"It's easy enough that Jeff can play it," Cochran jests. "He tries really hard."

The band is equally adept at playing impromptu campground shows -- such as last September's Walnut Valley Festival in Winfield -- and local venues like the Eighth Street Tap Room. During the recent sidewalk sale, they set up on the back of a flatbed truck and played their entire catalog (about 20 songs) twice.

Though the group's past sets have included songs by The Louvin Brothers, Neil Young and Hazel Dickens, most of the group's material is original.

This fall, Drakkar Sauna will embark on a brief Midwest tour with Bloomington, Ind., band The Impossible Shapes.

"People should come because they can talk and they won't have to pay attention," Cochran says.